Things got mighty quiet here in the San Francisco Bay area this weekend on the baseball front, on both sides of the Bay.  Knowing full well that there would be a lot of absenteeism at work this weekend due to 4 MLB playoff games, America’s Cup Yacht races, the annual Fleet Week with the Blue Angels flying around and NFL games, I did what any money grubbing self respecting person does in a free market society.  I volunteered to work, and the overtime was quite plentiful.

As punishment for that, I missed watching the Giants attempted free-fall out of post season play.  Outscored 14-2 over 18 innings, it was an offensive explosion by Cincinnati bats against some pretty good pitching.  Now I sit back watching the highlights of the Reds onslaught amongst the silence in AT&T Park.   I must say, it’s pretty cool to watch.  Not nearly as fun as watching a Dodger rout, but fun nonetheless.

Listening to the Giants post game show on the radio was quite the experience.  Their fan base is shell shocked. As enthusiastic as they were before the series started, they are now on the opposite spectrum, preparing themselves for the worst case scenario - a three game sweep.  With Homer Bailey taking the mound on Tuesday, that's a genuine possibility.

On a personal front, the Giant fan co-workers that have been relentless with their constant jabbing and joking are mighty silent.  I have nothing to gloat about.  They beat the Dodgers for the division crown.  I’m just happy that, (barring a miraculous comeback), this won’t be a repeat of 2010.

On the Dodger news front.  Not only was Matt Kemp’s surgery more serious than originally thought, we now receive word that A.J. Ellis is recovering from surgery from a meniscus tear in his left knee.  Having personal experience with this injury, I have a greater respect for the Dodger catcher, who continued to play up until the last day of the season, and catch well at that.

I’m surprised he was able to squat into a crouch and run the bases.  It also makes me understand a little more why Mattingly was attempting to have Ellis bunt the runner over in the ninth inning of the elimination game against the Giants.  He must have really feared that he would possibly ground into a double play, a real possibility since Ellis had absolutely no wheels due to the injury.

For a full breakdown of the Dodger injuries and off-season surgeries/recoveries, take a look at Eric Stephen's post at TRUEBLUELA.COM -LINKED HERE

After watching the Giants-Reds game replays, I find it hard to believe that this is the same Reds team that we saw the Dodgers face in Cincinnati a few weeks ago.  The Dodger pitching shut them down for three games.  Games that meant a lot to the Reds as they were attempting to clinch a playoff spot.  I know it's fruitless to talk about, but I'm about 100% sure that the Dodgers would have given the Reds a good fight in a playoff series, especially the way they were playing at season's end.

The Dodgers failing to make post season play has turned out to somewhat be a blessing in disguise.  Had they made the  playoffs, Matt Kemp would have continued playing with a torn labrum in his left shoulder, and perhaps could have caused further damage.  As things stand now, we are hopeful that he can play by opening day and that his power will return.  Adrian Gonzalez had the same injury and off-season surgery before the 2011 season.  He admitted that his true power didn't return until mid-season during that first year in Boston.  A Matt Kemp power drought should be expected in the beginning of next year. 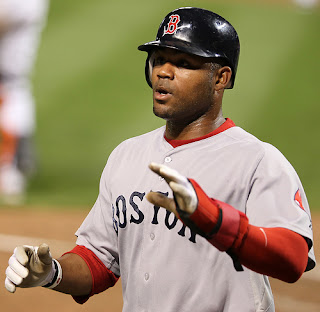 With Carl Crawford and Matt Kemp starting next season at less than 100%, the 4th and 5th outfielder slots have suddenly become quite important to the Dodgers.  One thing the Dodger rode this season was the advantage they built with 10-2 start against a number of inferior opponents.  In 2013, they again face weaker opposition in the first month.  After their opening home series against the Giants, they play 12 consecutive games against sub .500 opposition.

I wouldn't count on the Dodgers rolling through May with the best record in baseball as they did this year.  First, because Kemp and Crawford won't be 100 percent and, second, due to a tougher schedule.  During the first two months of the 2013 season will play on the road in Baltimore, San Francisco, Milwaukee, Alanta and Anaheim.  That's a lot of quality competition.