How Dodger Stadium Can Be Aesthetically Enhanced 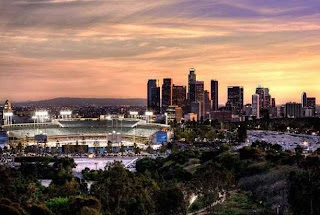 There are times that I can become obsessed with this blog and other times when keeping it up to pace is a chore.  The ideas seem to always come for topics to write on.  This mind of mine thinks about this crazy baseball team all too often.  Over the course of the marathon season, there is so much going on.  If you really think about it, the Dodgers have been through so much transition just the past few years with the ownership in flux and the recent changes, that volumes and volumes of material has been written and discussed.

So as I look back at the near two year history of this blog and at my message board and blog posts at various places dating back over 15 years, I was interested in seeing which article I wrote that received the largest number of “page openings.”  It surprises me to this day, that a post I wrote as an afterthought back in March of this year, before the new ownership group was announced, has about twice as many hits as the next to highest post that I have written.

“Dodger Stadium, What New Ownership Can Do to Win Over the Fans,” was it’s title. ( LINKED HERE )  I discussed at length the beauty of Dodger Stadium and what can be done to upgrade the place.  I didn’t speak about Kool-a-Koos, or better wi-fi and cell phone reception.  There was no discussion of modernizing the bathrooms, more drinking fountains,  increased food choices in concessions or creating a playground for kids.  All of those things are nice enhancements and have be addressed in many blogs over the past several months.  My post was strictly based on keeping Dodger Stadium an aesthetically pleasing experience.  Maintaining the beauty of it and most importantly, enhancing that beauty with accessible artwork that would commemorate Dodger history to all the fans.  I still feel the same way.

When Stan Kasten announced in week one of ownership that he welcomed emails from fans with ideas addressing how to improve the fan experience, I fired off an email that addressed what I discussed in the post.  The Dodgers needed to unveil statuary of it’s stars, and starting with Sandy Koufax.  At blogger’s night in July, Mr. Kasten was available for a Q & A session with the many in attendance.  Unfortunately, I couldn’t get that question in as so many were concerned with the state of the ball club.  A question about statues in various parts of the stadium didn’t seem appropriate when all the discussion was dominated with how to win now, the trade deadline rumors and building up the farm system.

But I’ll repeat it.  Dodger Stadium history needs to be commemorated and displayed for all fans to see.  Sandy Koufax needs a statue before he isn’t with us on this earth any more.  The Dodgers need to enhance the Stadiums beauty with historical artwork that tastefully reminds us of it's great moments such as: Hershiser and Big D’s Streaks, Gibson’s homer, Fernando’s amazing run, the foursome that hit 30, Iron Mike’s incredible games pitched record, Sweet Lou’s clutch World Series homer, Sandy’s perfecto, Maury’s 104, Tommy Davis’ 150+ RBIs/consecutive batting crowns and so much more.

The club level displays are awesome, but how many really get to see them?  Statues need to be in place so fans can pose in front of them for pictures.  Dodger fans need to enjoy the history and read up on it as they meander around concourses or pass through turnstiles.  Behind the Pavilions and at the Field Level entrances there are some great staging spots for statuary of Big D, Little D, Fernando, Gibby, Campy, Jackie or the Garv.

At the Top of the Park, just after you enter the Stadium there is a precipice that overlooks the towering Stadium that sinks below 4 levels.  Something real special could be done there that overlooks the ballpark and all the colors and its backdrop beauty.  I suggest a Koufax statue, possibly enhanced by a fountain with the background being the colors and panorama of the skyline that goes beyond the outfield walls.  This could be the focal point of the Stadium.  It would be the shot that ESPN or Fox constantly uses on National telecasts.  It’s the "Kodak moment" that every fan wants and the most popular post card photo, poster or photo that is sold in every gift shop.  Another special piece must be done of Jackie Robinson, who is, an LA native...so it's appropriate. Kasten and Co. are getting things done and enhancing the infrastructure of Dodger Stadium is a must.  As one of the few that has experienced the Dodger locker room as it is packed with players, it's size is embarrassingly small.  We've all experienced the deplorable bathrooms and the awful cell phone reception.  These things are getting fixed this off-season.  Plumbing, electrical, some seismic retrofitting.  It is all necessary.  Once it's all done, I say let's get Dodger Stadium up to snuff with the artwork.  The history of the team that many of us consider to be the greatest franchise on earth needs to be recognized in a tasteful and memorable way that can be enjoyed by fans long after we are gone.
Posted by Evan Bladh at 12:17:00 PM