Tidbits Before the Final Freeway Series of the Year

A 7 1/2 game lead with 28 games to play makes thing look mighty positive, but I've seen enough pennant races in my 54 years to recognize that some crazy things could happen.  So, I'll refrain from doing any celebration dances because I hate putting the hex on the season.  Also, will anything short of a World Series appearance be satisfying enough to remove the awful taste of how last season ended?

CHEMISTRY
The additions of Chase Utley, Corey Seager and Justin Ruggiano seem to have sparked the club with new blood that has been sorely needed.  Time will only tell if the Utley rental won't bite us in the rear end for years to come, but that is one of those moves that I am all for...simply because it's guys like Utley that bring that playoff presence that just might be what's needed in post season play.

Ruggiano looks to be rejuvinated and a valuable bat against lefties.  Seager, well he's the real deal and appears to have ice-water in his veins.  I don't recall a Dodger rookie having that much poise, ever. And the have been a lot of successful ones.

HAMSTRINGS
I read on other blogs some strong words asking for Stan Conte's outster because of the slew of hamstring injuries this team has had.  I really have a difficult time believing that it is the fault of the conditioning staff that has caused the Dodgers problems in this area.  Do we really believe that the training staff doesn't have the guys stretching adequately in their pre-game preparation?  It's bad luck, simple as that.  Maybe there could be some blame on Puig's part for playing too many video games and not taking his conditioning seriously...but I could be completely off there too.

Injuries are fickle things.  Remember, it was just a few years ago when the oblique pulls and strains seemed to be the injury that was the most prevalent.  (The same injury that Giant Hunter Pence us recovering from at the moment).  I believe that with the Dodger training staff and state of the art facilities, that the team has done just about all they can to prevent the pulls, strains, tears and breaks that occur over 162 games.  Ask the Giants, who have had their share of bad luck this year too.  Injuries happen, and sometimes more often than normal.

The teams with the greatest depth prevail over injuries, and the Dodgers have definitely built a ball club with a lot of that.  This 2015 team has trotted out 54 different players on the field, the most of any Dodger team in history, (the 1998 team used 53 players), and who knows if a few more minor league call-ups occur after the PCL playoffs are over.   That's what $300 million in payroll can do to you.  That's also a lot of World Series rings if the club wins it all.  (Note: of those 54 different players, 31 were pitchers). 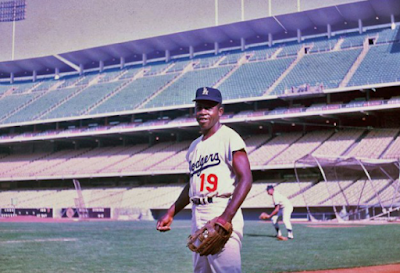 The countdown has begun.  The number is at Jim Gilliam at the start of today.  Hopefully it'll get down to A.J. Ellis by around 10:30 PM tonight.

A PERSONAL MILESTONE
I just took count and realized that this Dodger season I have watched our boys in blue on MLB network from three continents and ten different countries, and I'll add a few more locations before the month ends.  By my count they are USA, El Salvador, Guatemala, Panama, Antigua & Barbuda, Dominica, St. Vincent and the Grenadines, Ghana, Mexico, Colombia and coming up in the next three weeks: Brazil and Thailand.  I definitely got my money's worth out of the MLB internet package this year.  What a blessing that is.  It's watching games in crazy time zones that makes things difficult. There are a few misses for me as well: