A Few Things to Ponder 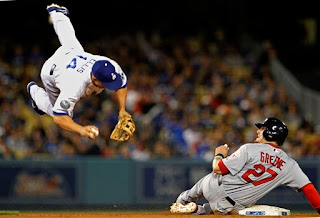 When Matt Holliday plowed into Giant second baseman Marco Scutaro in Monday's action, how many thought of the Mark Ellis collision that occurred when Cardinal Tyler Greene slid into him?  What is it with the Cardinals and their "aggressive" play?  Is it "aggression" or "dirty" play?  It can be argued that both slides happened beyond the second base bag.  Awfully late in my opinion.