Back in June, Pablo Sandoval’s season was in serious jeopardy.  To some Giant fans, they were ready to move on and turn the page to another chapter.

Stories vary on what happened and the charges were eventually dismissed.  But the incident occurred during the mid-week and he was out late partying, and in Santa Cruz no less.  Sandoval was supposed to be healing up and concentrating on getting back in playing shape.

The Giants weren’t happy.   Sports talk radio in the region was hammering the “Panda.”  Bruce Bochy called him back from rehab for a private meeting.  Both his manager and G.M. went public with statements that were critical of Sandoval.

To Manager Bruce Bochy’s credit, he never embarrassed his third baseman.  He simply let the world know that his team needed him and he better get back in playing shape and straighten himself out.  “We need to get Pablo in shape to play third,” said Bochy. “I hope we’re not forced to make a change.  That’s in Pablo’s hands.”

Behind closed doors in their meeting, there is little doubt that the Panda got torn to shreds.  He was too fat.  He was losing his job to a career minor leaguer (Joaquin Arias) that was unfamiliar with the third base position.  He wasn’t taking his career seriously and the Giants were in a position to keep him down in the minors until he did so. 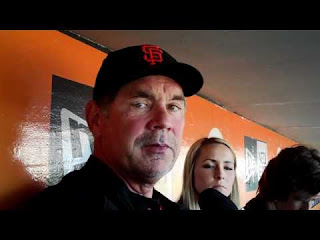 It looks like Bochy provided the motivation he needed because within a week, Sandoval was back up in the Majors and by the All Star break, he was the N.L. starting third baseman in Kansas City.  This is the side of the Giants manager that few see.  He’s a quiet motivator.  He doesn’t embarrass his players in public.  He used the subtle quotes to the press to get his player mad at himself and motivated to get his act together.

Yesterday in game one of the the 2012 World Series, Sandoval made history and homered in his first three at bats on his way to a 4 for 4 day.  June was a long time ago it seems.  So long ago that few remember the tumultous period that Sandoval was going through.  Had the situation been handled differently, Sandoval might not have even been on the roster this post season and history would not have been made.  It is quite an extraordinary comeback tale.  Kudos to Sandoval for turning things around.  Even more so, credit Bruce Bochy.  He played a big role in straightening his player out, and few even remember it.