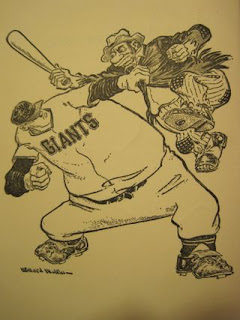 Sometimes I just shake my head in disbelief.  There are times that someone has so much going for them, and they still dwell on negativity.  They can be on top of the world and want to still crush their opponent.  Call it Machiavelian syndrome, Attila the Hunism, whatever.  I think it’s wrong.  I’ll never understand that mentality to rub salt in the wound of your opponent, even a despised opponent, when they are down.

Do you ever wonder why a football player, after scoring a touchdown, will showboat to the point that they draw an unsportsmanlike conduct penalty?  Have you ever pondered and thought, “why do they act so stupid?”  I’m not sure who said it, but one of the best pieces of advise that I ever heard was, “when you make it to the endzone, act like you’ve been there before.”  Jim Brown would score and he’d hand the ball back to the ref.  No dancing, no dirty bird, no running to the painted insignia of the opposing team on the field, no sharpie or cell phone pulled out of the sock, and certainly no taunting the defeated opponent. 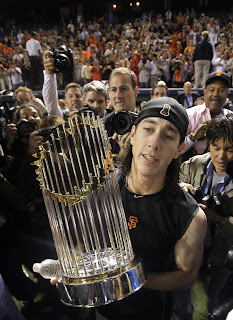 Well guess what?  The San Francisco Giant fans have never been there before.  A World Series Championship is new to them.  They won it and are confused about what’s next.  So what do some of them do?  Taunt L.A. Dodger fans.  They raise funds to rent a plane to fly a banner over Dodger Stadium at our home opener and attempt to spoil the Dodger Stadium party.  This was a major topic of discussion at the Giant flagship station yesterday.  And overwhelmingly, the idea is popular and supported by almost everyone.
Hey, we’re guilty too.  I remember idiot Dodger fans dancing on the Willie Mays statue after the Dodgers clinched a playoff spot at Phone Bill Park in 2006.  That was pretty bush league in my opinion.  But I am fairly certain that as a whole, we don’t care nearly as much about the Giant as they do about us.  Everyone hates us, Padre, Giant, Angel, Rockie, Phillie fans.  Just about everyone chants “beat L.A.”  Aside from the Yankees, and possibly Dallas Cowboys, I can’t think of another sports franchise or city that is as disliked more than the Dodgers and Los Angeles.  I would never expect Dodger fans, following a Championship season, to attempt to pull off a stunt like this in San Francisco.  Perhaps I'm wrong, but I don't think so.
I truly believe that all this stems from an inferiority complex that Giant fans have felt for a long time.  They shouldn't have it, and they’ll never admit that they have it, but for years they have been jealous of Dodger success.  All of our titles, our good weather, our immaculate stadium.  They hated it.  Candlestick was a dump, their weather out there: atrocious.  They had these great teams in the 60s that were chalked full of future hall of famers and they never came out on top.  Meanwhile, our scrappy Dodgers won three titles with amazing pitching, fundamentals, good defense, premium base running and an almost anemic offense that would score one or two runs a game.  That drove them crazy.  Then in the 70s and early 80s we dominated them with those fine Dodger teams of Garvey, Cey, Reggie Smith, Baker, Lopes. et al.
Never mind that the Giants owned us from ’97-’03.  It didn’t matter.  The past history had created this mindset that simply hated us.  Adding to all those factors is the fact that , they had to hoard their water for us, they arguably have worse earthquakes than us, we have Disneyland, Knotts Berry Farm and Universal Studios and they have Great America (yeah, I know, what’s that?).  We have the Lakers while they have the Warriors. We have pristine beaches such as Malibu while they have freezing cold shark infested beaches, practically unswimmable without a wet suit.
So we, as Dodger fans, can react to this banner idea in a few different ways:
1) We can ignore it, (probably the best option).
2) We can take this as a compliment.  Think about it.  The San Francisco Giants after 52 seasons finally won a World Series and they are STILL thinking about us.  They probably have more respect for our club than we do.
3) We can get angry and fight, which is the reaction that the Giant fans want.
4) Or we can counter with something like this:
I kind of like option 4, but my mature side says to go with option 1.
Posted by Evan Bladh at 1:02:00 PM