Over the years I have collected autographs on baseball cards.  I found it to be a worthwhile pursuit.  Not because I planned on reselling the cards.  It was because I simply enjoyed collecting.  But as the last few years have gotten more and more hectic, I simply haven’t been able to pursue this hobby as I would like.
I used to regularly mail off cards to players during Spring Training.  It would be a bit time consuming, but in the end, I felt that it was worthwhile.  I found that I had upwards of a 60% return rate of cards in the self addressed stamped envelope I would send.  If the player wasn’t an absolute star, return rates would easily be over 90%.
I should note that there is also a very useful resource available to baseball player autograph collector's known as The Baseball Autograph Collector's Handbook, by Jack Smalling.  This handy book provides addresses of present and retired players, managers, umpires and executives that are updated every few years.  Pictured here is the 10th edition.  I understand that the 15th edition is now available for sale at: 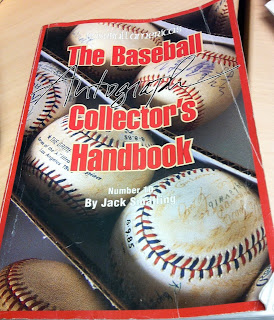 Whenever I receive a card in return, I place it in a plastic sleeve and store it away.  I cut the portion of the return envelope with a post mark to show that the card had been sent from Phoenix or Sarasota or wherever...for some type of proof of authenticity, and I slide that postmark in the card sleeve as well.  I stopped doing this about 4 years ago, but in the late 90’s and early 2000’s I was relatively active in this collecting.  As a result, I probably have 200-300 autographed cards packed away.
In 1999, when I threw out the first pitch during “Think Blue” week.  I had the priviledge of walking through Dodgers Administrative offices before game time and noticed that matted in a frame were autographed Dodger cards of some players from the champioship teams.  I thought that perhaps I could do the same, collecting signed cards one by one of players from the World Series Championship Teams of 59, ’63, ’65, ’81,  and ’88.  This has turned out to be a rather difficult task and I pretty much gave up the pursuit a few years ago.  Think about it, getting autographed cards of players from each World Series Championship team, many of which have since passed away.  It's kind of tough.
In my pursuit of this goal, I purchased some old vintage Dodger Autographed cards on eBay but I have fallen far short.  I did get started though, and I forgot how far along I had come.  That was until I started searching around the attic where I stored my collectibles three years ago when we changed residences.  What I found was a treasure trove of signed cards, and I have now caught the fever again.  It’s time to go after these cards.
Some of the findings that I scanned are:
Walter Alston 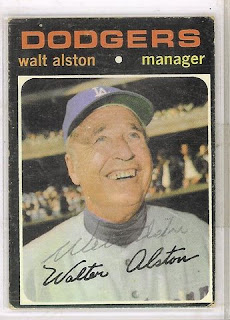 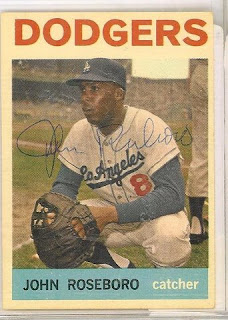 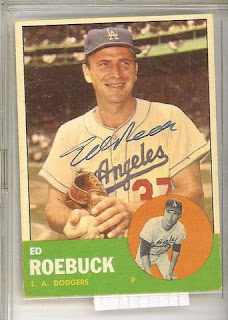 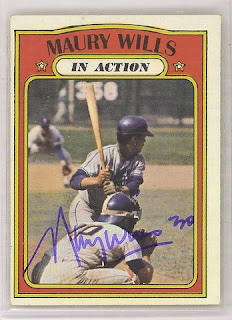 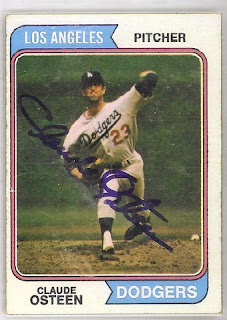 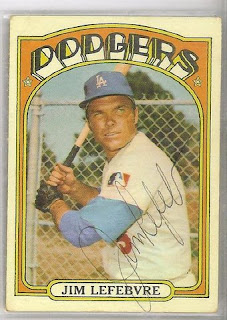 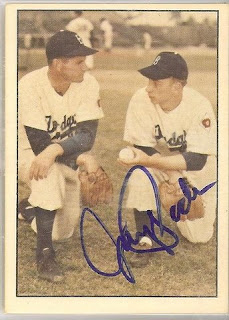 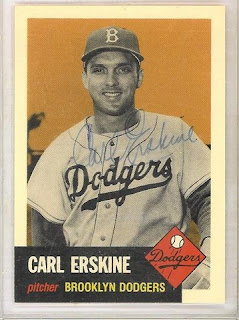 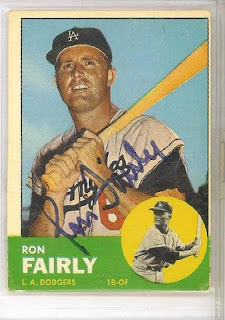 There are many more.  Perhaps it's time to start up again.  I think I'll have a go of it.

Oh, I almost forgot.  Amongst my findings was this John Wooden black and white signed photo and signed card of his favorite maxim's, seven point creed and pyramid of success.  Something to value forever.