My Search for the Remains of Ebbets Field

It was March, 1999 and my wife and I took our one and only European vacation of our lifetime.  Unfortunately we invited a couple from work to accompany us and soon into our trip we realized it was a big mistake.  As we trekked from Spain to France to England then Belgium, I soon realized that my wife was on the verge of ringing the neck of the woman in our party who, was simply a very difficult person to get along with.  Since our reservations and travel arrangements required us to travel together, the trip was becoming the vacation from hell.  By the time we got to Switzerland, we had enough.  We went to a travel agency and booked a flight back to the U.S., to New York on Swiss Air.  My wife had relatives in Brooklyn and Queens so off we went.
I knew what that meant.  I was passing up on continuing on to Italy.  Rome and Venice would have to wait for another day.  In exchange we were going to Brooklyn, where I would get to do something that I always wanted to do, search for the former site of Ebbets Field.
We arrived in a freezing cold New York, and took a cab to her cousin Jenny’s house where she greeted us warmly and offered us lodging and food.  We then plotted out our itinerary for the next few days.  We saw the New York sites, took a bus tour, Statue of Liberty, Ellis Island, Empire State Building, all of that.  I even went to Mickey Mantles restaurant which is a great, but most importantly, I had an afternoon to go to seek out the former site of Ebbets Field.
I had read The Boys of Summer and seen the Brooklyn Dodgers documentary series , The Brooklyn Dodgers: The Original America’s Team by Pee Wee’s Son.  I knew from watching that 5 Part Series that the ballpark used to stand at Sullivan Place and Bedford Avenue.  So on a cold afternoon, I flagged down a taxi and told the driver to take me there.  Unfortunately, the driver was Russian, so I really couldn’t discuss much about the old Dodgers with him.
He took me to the corner of Sullivan and Bedford and I got out.  Immediately I noticed towering apartments in a dilapidated neighborhood.  I took a few photographs and searched for remnants of where I thought the old ballpark ballpark was.   (I would love to post those photographs in this piece but my search for them has been in vain, I found one from my office that is provided later).
The first sign that I knew I was in the right place was as I walked down McKeever Place and saw “Jackie Robinson School.”  There was a mural of Jackie painted on the wall.  At the time, graffiti was written across it.  In this photograph taken a year ago I now see that the graffiti has been removed. 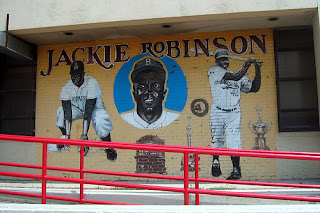 I circled the block.  I took a right turn at Montgomery St. and another right back on Bedford and worked my way back to Sullivan again.  I remembered Larry King talking about how as a kid, he and his friends would lay down prone on there stomachs and watch the game through a crack at the bottom of the fence in right field and how a policeman would walkup behind them and smack them on their backsides telling them to move out of the way.  I pictured that scene as I stood at a service station across the street from where I think the right field fence stood, in front of me were the towering Ebbets Field Apartments.  Clothes hanging from balconies 20-25 stories high. 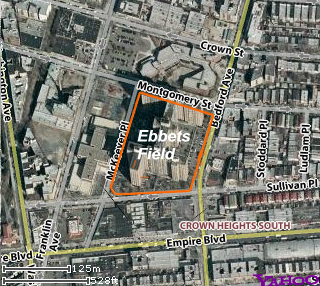 What struck me we how tall these apartment buildings were.  They are really up there.  I stood at a service station parking lot and took a few more pictures.  A kid working there looked at me puzzled but non-threatening.  I just asked him, “That’s where the old ballpark stood right?” and he said, “Yeah, that parking lot there is where the right field wall was.”  I asked him about a plaque or anything and he said he didn’t know of anything except that “Ebbets Field Apartments” sign on the brick wall in front of us. 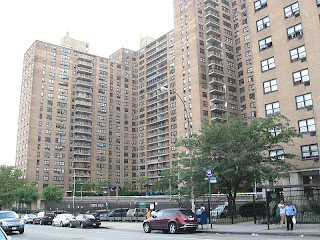 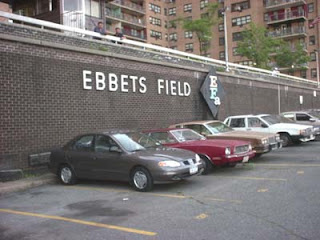 I crossed the street and walked along the wall of the parking lot, imagining that at one time Carl Furillo patroled that field in front of the Abe Stark sign and the Schaefer Beer scoreboard.  Then I saw it,  I caught a glimpse of the elusive landmark sign.  Cast in concrete on the brick wall was a plaque identifying this location as the former site of Ebbets Field.  Had I not been searching I would have missed it and shrubbery partially concealed it.  I took some more photos. 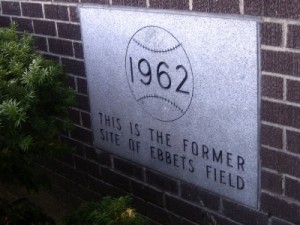 So I sought out people.  I stepped in a few retail stores, looked for anybody that may have been around at the time of the old ballpark.  I struck up a conversation with a white haired, sixty-something year old and asked if he recalled the Ebbets Field days and he said he did but said I wouldn’t find much that indicated it stood there “except an old plaque covered by bushes.”
I asked him if there was anyplace nearby that commemorated the Brooklyn Dodgers.  And he said, “Go to Bamonte’s Restuarant, it’s an Italian place that is a shrine to the old Dodger teams.”  I asked him to spell it out for me and he did.  I thanked him and left. 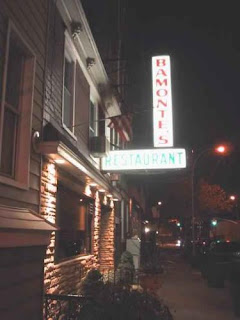 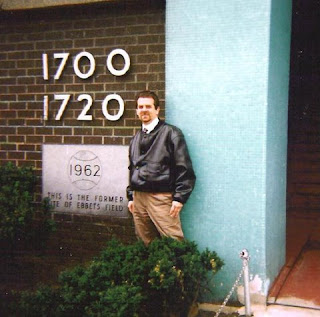 I received an email from Martin Corrales, newest Dodger Blogger,  Go check out his site at:
http://truetotheblue81.blogspot.com/


He has a great story on his trip to game 3 of the '81 World Series and how they got in after losing their tickets.