Farewell to a Great Dodger 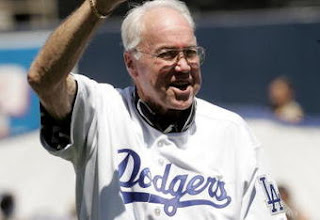 On this sad day in Dodger history so many condolences have been offered.  The words from so many great people that knew the Duke have been said and I can’t possibly come close to equaling their eloquence.  Suffice it to say, Duke Snider was a great Dodger.  Duke was a great man.
Duke Snider is a year older than my father and attended a High School within five miles of his.  I never asked Dad if he had high school memories of the Duke, and I can’t ask him now because sadly, his mental state has been incapacitated due to a stroke.  But Duke is from my dad’s Los Angeles generation, and his death hits me because I know my father’s isn’t too far off either.
As other blogs and web sites post highlights and footage from Duke Snider’s playing career.  I post something a little different.  A few clips from Duke’s appearance on “What’s My Line.”  One from 1954 with Sal Maglie and another alone in 1958 following the Dodgers departure to Los Angeles.
Wow, Duke had a great smile didn't he?
Posted by Evan Bladh at 7:30:00 PM