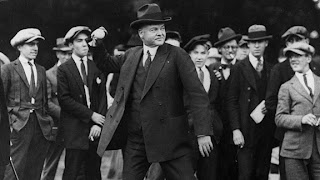 I got to thinking about all the Giant stuff I have collected over the last 15 years.   I didn’t intend to collect the stuff, but it seemed that everytime I arrived at their ball park to see my Dodgers play, they’d have some trinket to give away.  Whether it is a “Beat LA” cap or towel, or refrigerator magnet or pin or key chain.  It seemed like these things would always fall in my lap.
My wife will tell you that I’m a total packrat.  I’m an incessant hoarder.  I have tried over the years to let go of stuff, but I’m just guilty of saving junk, and then, because I’m not the most organized person in the world, when it comes time to find something, I don’t know where it is.
Who do I blame for all of this?  Well Herbert Hoover of course.
You see, it all stems from the great depression.  I was raised by two parents that were raised in the throes of the depression.  My mother, saved everything because you never knew when you would need it.  She has never gained weight over the years and if you go to her closet, you’ll find blouses that date back to the 1950‘s.  Walk into her kitchen and she’s still using pots and pans that were used during my childhood in the 60s and 70s.
My father tells me the story of going with his father  to the construction site of I-5, the Santa Ana Freeway, when it was being built through East Los Angeles.  A number of homes were demolished to build the freeway and their rubble had been cast aside.  Well dad and my grandpa went to the site to scavenge lumber, tiles, nails, pipes, hardware for doors and cabinets, and other building materials that could be reused.  Whatever they could scavenge they grabbed because building supplies were scarce and they were building an In-law home in the backyard of their East Los Angeles home for my great grandmother.
So it’s in the genes.  I save everything.  I’m in the habit of bending used nails back into shape because my dad taught me that.  Also keeping demoed parts from our bathrooms, closets, plumbing, etc and holding onto them because, that just what you did, nothing was wasted.  And I wouldn’t have been taught this had there not been a frugality in my parents generation brought on by the great depression, and arguably, historians have pinned the blame of the depression on Herbert Hoover.  That might not be fair, but he was in office when it occurred, so by that logic...you can blame Hoover for the fact that I hold on to ever ugly Giants trinket that has been handed to me as I passed through their turnstiles.  Here are some of them that I haven’t tossed out.