Is Hong-Chih Kuo Amongst the Best Dodger Relief Pitchers Ever? 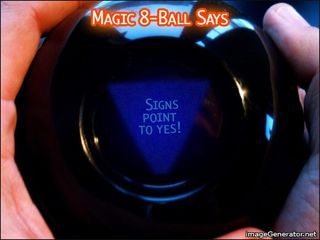 Well if the Magic 8 Ball says it, who am I to argue?  The statistics over the past few years for Kuo are quite impressive.  Not quite "Gagnesque," during the steroid era, but who ever was that good?  Hong-Chih Kuo has been amongst the best relievers in the game.  Yes, he has been that good.  If only he could pitch more.
Kuo is about as good as he’s going to get.  Setting a Dodger record with the lowest E.R.A. for relief pitchers with over 50 innings pitched, he’s about as close to “lights out” as you’ll find.   The torque and twisting he engenders while firing his fastball almost has to be seen to believe. The injuries to his arm can attest to his “war-torn” image.
Just two seasons ago, it looked like Kuo had enough.  Having experienced two Tommy John surgeries early in his career, for the second time in a two year span, Kuo experienced elbow issues.  On May 2, 2009, after a few lackluster outings in April, Kuo was called upon to warm up in the bullpen and he proceeded to bounce 7 pitches and then throw another two to the Dodger infield from the left field bullpen mound.  They shut him down.  And reports were that Kuo had run out of patience and there was a good chance he’d hang up his cleats for good.   And who could blame him?  Coming back from one TJ surgery is tough enough, but two?  And then additional elbow surgery?  I could understand why Kuo was fed up.
But he came back.  After a three month layoff following another surgery, he lowered his E.R.A. from 6.75 one trickle at a time down to 3.00 to finish the season.  That wasn’t an easy feat when you consider that he would be called on by Torre to take out the lefthanded batter in a lefty vs. lefty matchup and would often be removed immediately afterwords.  Kuo’s longest outing from July 27 to the end of the season was one full inning, yet he still lowered that E.R.A. by 3.75 runs.
So last spring when a disappointed Kuo couldn’t pitch in an Overseas Spring Training assignment in his home country, I thought he was done.  But it turned out the fatigue he felt was common Spring Training “dead arm” issues and he regained his strength and was the primary set up man as the season started. 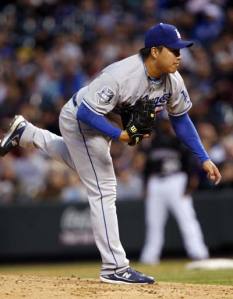 We, as Dodger fans, have been spoiled in the past decade with stellar relief pitching.  Gagne was no doubt the greatest reliever on the planet for 3 years.  That set the bar real high, and Saito delivered more than satisfactorily following Gagne’s departure.  It wasn’t only until recently that Broxton disappointed us, but the first portion of his career was very solid when compared to other closers in the game.
So now we have the fragile Kuo.  I understand why he hasn’t been named a closer by Dodger management.  1st, because he’s about to go through arbitration, so why grant him that role of closer and show an arbitrator how valuable he is to the organization?  2nd, because of his injury history and inability to pitch on consecutive days.
So if I were representing Kuo in an arbitration hearing.  These are the points I would hammer home:
* In two of the last three seasons, Kuo leads all relievers in Earned Run Average. (2008 relief pitching ERA of 1.69 and a 2010 ERA of 1.20).
* He set the major league record for retiring consecutive left handed batters in 2010.  They absolutely could not touch him.  He retired 36 consecutive lefties.  Lefties batted .095 against him for the season.
*     As the lone dominant player in the game from Taiwan, Republic of China.  He is instrumental in bringing in significant      numbers to the gate as evidenced in this "You Tube" clip where a certain Taiwanese contingent of fans (Upper Deck, 1st base side) reacts to the announcement of Kuo entering the game.
* He became the first Taiwain representative in a Major League All Star game with his 2010 appearance.
* In 2008 Kuo was named set-up man of the year.
* In home games, he only gave up one earned run in 31 innings of work for a Dodger Stadium E.R.A. of 0.29.
* After being named the late season closer, Kuo saved 12 of 13 games.
* With a lifetime K/BB ratio of 3.0, (4.06 in 2010) and and K/9innings ratio of 10.5, (11.0 in 2010), he is among the best in the game.
* In 2010, Kuo gave up only 1 home run over 60 innings pitched.
So, Mr. Arbitrator, give Kuo his $3.075 million and tell Ms. Ng to have a seat.  Let her dedicate her efforts on making sure Loney doesn’t get the big money.