It gets to a point that you can’t stand it anymore.  I had reached my “Howard Beale” moment, and  I arrived at that point back in April of 2001.  After 6 years of listening to Giant broadcasters flaming anything L.A. or Dodger related on their local broadcasts, I’d had enough.  I can’t even remember what was said, it was just so irresponsible and inaccurate, that I had to write a letter.  So I did.  I wrote the culprit, Mike Krukow, former pitcher, and current Giant broadcaster.
Krukow is knowledgable.  He has some good insight of the game.  He was a fine pitcher, a 20-game winner and an all- star.   I think if he were in a neutral location, someplace where his “homerism” and passion for his team didn’t overtake his brain, he could be a real good analyst.  But that doesn’’t happen here in San Francisco.  At least that's the way I hear it.  They absolutely worship him in the Bay Area.  I have had many an argument with Giant fans here that don't see it my way.  They think he's the best analyst on the planet.
So I called out Krukow on something that was so obviously inaccurate and off the mark, that anyone that followed the game with regularity would know of its falsehood.  I told him that I realized that he knew his audience and that he had made a choice years ago to simply bash anything L.A. on his broadcasts and it would be received giddily by his followers that worshipped his every word.  I added that I understood that, but there is a level of responsibility and honesty that has to be communicated to his audience, and he had failed to do so.
I was very clear.  I told him I was a Dodger fan in Giant country and that I listened to his broadcasts quite frequently.  I said that perhaps he should remember his childhood when he listened to impartial announcers such as Vin Scully, who painted an honest picture of events before him.  I wasn’t so blunt, but I do remember telling him the impartiality line and mentioning Scully.
I figured I’d never hear back.  What did he care?  I was a lowly Dodger fan in his territory.  Well, this is what I received back. 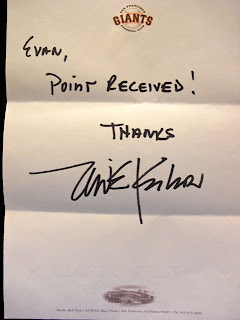 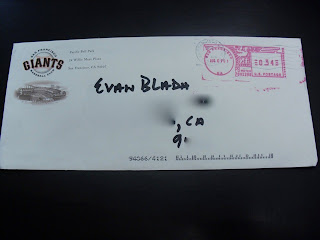 Okay, I made my point.  He acknowledged he received it and as a result...I feel better.  Has anything changed?  No, but I still feel better.
Posted by Evan Bladh at 8:38:00 AM