Celebrating his 63rd birthday today is Charlie Hough.  A pretty good pitcher that was forced out of town by dodger fans in the 1970s.  Why?  Because fans often are complete morons and turn on a player after a few bad outings.  This was something that was starting to happen with Jonathan Broxton last year.
Charlie as a Dodger was misplaced.  They threw him in the bullpen and he probably should have been starting.  This rubber armed knuckleballer could have taken the ball every day.  Once given the chance to start following his trade from the Dodgers to Texas, he ran a string of 13 consecutive years where he took the ball in the first inning over 30 times each year.
Charlie completed a career with 216 wins and 216 losses for some very awful teams in Texas, Chicago (AL) and Florida.  Always ranked among the leaders in complete games, innings pitched and hit batsmen, Hough lived the life of a dependable knuckleballer.
So what happened in L.A.?  Why wasn’t he a part of the starting rotation?  The answer most likely was two fold: 1) he was effective as a reliever and 2) there wasn’t room on those Dodger staffs for another starter.  Tommy John, Don Sutton, Andy Messersmith, Burt Hooton, Doug Rau, Rick Rhoden, Al Downing, and Claude Osteen were members of the Dodger starting staffs between the years 1973-78.  Finally when injuries hit the starting rotation in 1979, Charlie got 14 starts for the club and proceeded to have his worst season up to that date.
He was booed unmercifully and it was embarrassing.  Hough was a guy that had put up stellar seasons in the bullpen and could start in a pinch.  He was a solid organzational guy who had given 14 years of service to the Dodgers.
Drafted as a 3rd baseman in 1966 out of Hialeah Florida, his first manager, Tommy Lasorda, converted him to pitching at Rookie League, Ogden, UT in 1966. “You might as well pitch because you certainly can’t hit,” is what his manager told the 18 year old.  Pitching coach Goldie Holt taught him the knuckler.  By 1970 he had made the big club throwing it.  After a few more years of struggles in the minors, Lasorda convinced Al Campanis to sign 48 year old Hoyt Wilhelm to assist him in mastering the pitch.  By 1973, Charlie was in the big leagues for good. 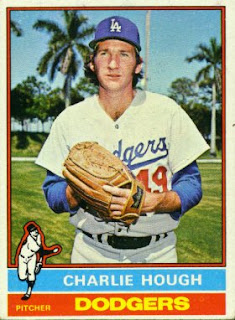 1976 proved to be his best year as a Dodger.  He became Walt Alston’s most reliable reliever during Alston’s final year at the helm.   Hough finished that campaign nearly winning the ERA title out of the bullpen with a mark of 2.21.  He came up 20 innings shy of qualifying for it after pitching in 77 games with 140 innings.
After a poor start in 1980, Hough was given away for cash to the Texas Rangers.  Eventually he became the only major league pitcher to start 400 games and relieve in 400 games.  Within two years he was winning 16 games and representing his new club in the all star game.  Over a 7 season span, (1982-89), he won 120 games.  He has the distinction of being the first ever starting pitcher for the Florida Marlins, leading them to a victory over the Dodgers April 5, 1993.
Often Hough is shown in clips of the ’77 World Series having surrendered one of three home runs to Reggie Jackson in game 6 of that series.  It's unfortunate he is often just remembered for that incident but then again, maybe not for Charlie because it certainly gets him gigs at autograph shows.  Charlie had a fine career and pitched until he was 46 years old and a hip problem forced him from the game.  He could still throw the dancer until the end.
Happy Birthday Charlie!  I’m glad to see you still working within the Dodger organization.
Posted by Evan Bladh at 8:28:00 PM