It was an Oakland invasion of Blue last night.  In my lifetime, I have seen the Dodgers in visiting venues in Phoenix, Denver, New York, Florida, San Diego, Houston, San Francisco, Anaheim, and Oakland.  I’ve attending Dodger visiting games more than 250 times.  Never have I ever seen the Dodger fan take over the visiting ball park like last night. Maybe recent invasions of Petco were similar, as I must admit I haven’t been there for several years. 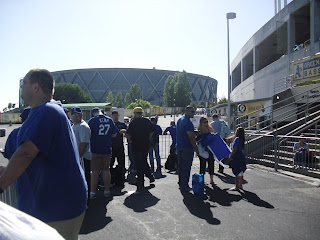 The most impressive thing that impressed me about last nights crowd made up of Dodger fans is that the had next to nothing to cheer about, and they STILL made their presence known.  Several chants of “Let’s Go Dodgers” started up and they dominated the entore stadium. In my section ”Let’s Go Dodgers,” changed to “Throw a Strike,” afger Harang threw about 11 conseutive pitches out of the strike zone. 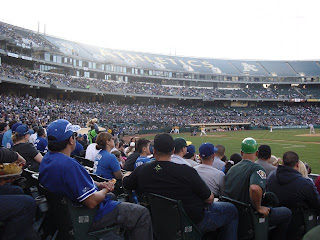 It's always fun striking up conversations with Dodger fans attending a game in the Bay Area.  Everyone has their stories.  There was the Steve, the guy I was standing in line with to enter the Stadium that moved from L.A. up to Morgan Hill about 35 years ago.  He talked of the old Candlestick days and the times that he had beer thrown at him and was beaten up in the restroom.  He said the trips were always worth it cause "We always beat their (expletives)."  Roy, the other Dodger fan in line said, "Yeah, at AT&T, it's their kids now that harass us, they aren't nearly as tough." 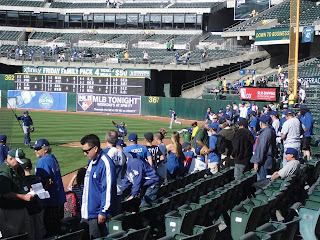 An A's fan sitting in front of me said over and over again, "I can't believe the Dodgers are here, this is so cool."  He reminisced about '88 and '74 World Series.  Claiming he attended both.  I kind of had my doubts, based on his age, but I wasn't about to argue with him.   "McCarthy is tough.  You guess are going to have problems with him," he said prophetically.
The Dodgers haven't faired well at the Oakland Coliseum since inter-league play began.  They're 2-10 in their brief history there.  I must say that I have been present for 4 of those contests now.  I seem to remember one where an unknown shortstop named Miguel Tejada hit three home runs against us.  Last night it was a trio of pitchers that tossed a 2-hit shutout.
It was rather helpless looking at the bottom of the Dodger line up with Kennedy and Uribe hitting consecutively and frustrating to again watch Loney deliver feeble at-bats.  Most notably his double-play nubber that closed out the only real rally the Dodgers had all game.
This was a contest where there never seemed to be an offensive threat on the Dodger side.  Where holes in the lineup would surface whenever the semblance of a rally was starting.  The Oakland A’s are not a good baseball team, but last night, that Dodger lineup actually looked worse than them.
Sometimes I look at the 9 guys that Mattingly puts on the lineup card and I wonder in amazement how this team has the best record in Major League baseball.  Hopefully the bats emerge tonight and make me forget that thought process.
Posted by Evan Bladh at 10:54:00 AM