Destroy your May 24th S.I's

Everybody dig into your drawers and pull out that May 24, 2012 Sports Illustrated issue.  I know you’re saving it.  You’re thinking, “This will be a nice keepsake,” or “This will be something to look at years from now and reminisce about how specials things were when the ownership changed.”  Some of you might be thinking that you might get both Magic and Kemp to sign the thing one day. 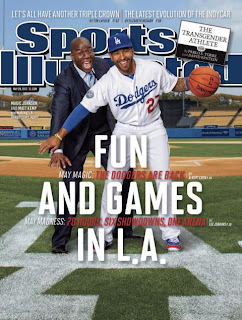 Get all of that out of your mind.  At the rate things are going, neither Magic or Kemp will be around in about a month.  Don’t even think about it.  Get it out, light a match and burn that sucker.  The hex is on.  We are absolutely cursed.  The S.I. voodoo is working its black magic on this team.  Check out the results since May 24th.
The Dodger Record is 3 wins and 7 losses.  The Dodgers have score 31 runs and given up 42.  The lead in the division has decreased from 7 1/2 down to 3.  The disabled list has accumulated Ted Lilly, Justin Sellers and Matt Kemp for the second time.  Heck, even Clayton Kershaw is in a slump.  How many times has that happened?  Need I go on?
Go dig that S.I. Issue out and shred it to pieces and after it is shreded, douse it with lighter fluid and strike a match.  Another option is rolling it up in raw hamburger meat and then feeding it to your neighbors rotweiller.   Or just stick  down the garbage disposal.   Wet it down and run it over with your automobile.  Whatever it takes...just destroy all evidence that it ever existed.
Once the evidence of the May 24th issue has been obliterated from our lives, it’ll be time to start a letter writing campaign to S.I. demanding that Matt Cain get some recognition on their cover.  We can work on that later.  First things first, destroy the May 24th issue!
Posted by Evan Bladh at 7:10:00 PM