A Shot at History

Whether they were known as the “Atlantics,” “Superbas,” “Bridegrooms,” “Grays,” “Robins,””Trolley Dodgers,” or “Dodgers,”  there is one thing this franchise has not done in their 128 year history:
They have never accomplished a 4 game sweep of the Phillies in Philadelphia.
The franchise has played 2,036 games against Philadelphia in their history.  The Dodgers on top with a record of 1,142 wins and 894 losses, but never in the 128 year history of this rivalry have the Dodgers swept a 4 game set in Philly.  Many are probably thinking that they didn’t play many 4 game sets in the City of Brotherly Love.  Au contraire my friend.  Maybe not lately, but by my count that have played over 150 four games sets out there, especially during the Brooklyn years when it was in the league’s best interest to have 4 game series played due to the difficulties of travel.
What makes this amazing, is that the Phillies have been the doormats of the National League for most of their existence.  We would never consider it now, (due to their recent successes since the late 1970s), but the Phillies are easily the worst franchise in baseball history, simply based on their record.  They have finished in last place during 30 seasons of their existence.  That’s 23% of the time.  They have lost more games than any franchise in baseball history (10, 263) almost a full 1,000 games more than they have won (9,265). 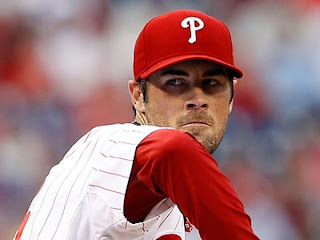 So this morning, this injury plagued Dodger team made up of scrubs, minor leaguers and scruffy veterans that is fighting to keep atop the NL West has an opportunity to make history.  They’ll have their hands full with Cole Hamels going against them and a depleted bullpen due to over-use.  It should be interesting.