Being No-Hit Isn't Fun, but It's a Requirement for Dodger Championship Teams

It’s never fun watching the Dodgers get no-hit.   If there is any solace in being served a “no-no” it has to be that the last two Dodger World Championship teams were also no-hit.  In 1981 by Nolan Ryan and then in 1988 when Tom Browning threw a perfect game at them.  When we think ’81 and ’88, the two no-hitters really don’t come to mind.
So look at the bright side.  We got to watch some history on Friday night.  If all things play out right, we’ll see the Dodgers win the final two games of the series and they’ll return home from this grueling 7,200 mile road trip with a winning record and semi-comfortable division lead.  I’d take that in a heartbeat.
When the Dodgers left a little over a week ago following that 4-game home sweep to the Brewers, things looked rather dismal.  Today, they’re still in possession of the best record in baseball and a rather comfortable 4-game division lead.
Facing the American League has always been a challenge for this club, but I’m confident that this magical Dodger team will break that trend this year.  Last night’s loss was an aberration.  Probably the result of a 6 1/2 flight back to the west coast and losing three hours on top of that.  Also, they were still within a whisker of winning, which is saying something when you’re no-hit by an entire pitching staff. 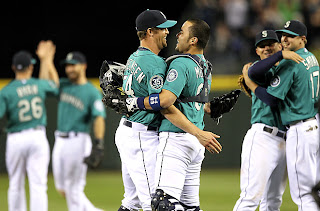 Like I always say, the great thing about the game of baseball is that there is usually a tomorrow that allows you to redeem yourself.  Well it’s already “tomorrow” and redemption is in the way, courtesy of Clayton Kershaw and a nationally televised game.  On with the season!
Posted by Evan Bladh at 8:25:00 AM