Dodgers   40-24
Giants      36-27
Once all this inter-league nonsense is over, we can get on with the task at hand.  That's beating the Giants for the division.   Last night wasn't a good night for us.  At the very moment that Aybar homered off of Jansen to give the Angels a 2-1 ninth inning lead, Matt Cain finished off pitching a perfect game in San Francisco.
Over the years I have been real quick to criticize the Giants.  It’s the team I love to loath.  I’ll admit, I’m biased.  I look for their weaknesses and keep things in my memory bank about them that I can use with the many I interact with at work.  It comes down to the fact that I live amongst the hated ones.  Sixteen unexpected years living in Giant country has convinced me that they are the most clueless and blind fan base in the country.  Then I married a Bay Area girl and I’m kinda stuck up here.  I never imagined that my life would take this turn.  I figured that I’d be living at the doorstep of Dodger Stadium and I’d have season tickets by now. 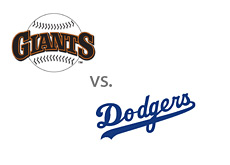 Instead Im near S.F., where I actually share season seats the Gnats games (that I sell at a hefty profit I must say).  I work amongst a gaggle of Giants fans and I have struck up a friendship with the 5 or 6 SoCal transpants here that also are Dodger fans.  There is a lot of fun banter between us and the Giant followers.  My office is a shrine to Dodger paraphernalia that has been redecorated in halloween colors more than once by practical jokers.  It doesn’t take much to shoot down a Giant fans logic.  It can usually be done with simple facts.  I must say though, the past decade or so this has been a tough run for us.  For a long while, Giant fans would usually brag about a few times when they knocked us out of a pennant race.  Now they have a championship to boast about.  Last night, they added a perfect game to their history.
I must admit to something though.  The Giants are actually pretty good.  Sure they have their weakness on defense and holes on the offensive end, but their pitching is probably the best in the league.  Cain, Bumgarner and Vogelsong are quite a trio.  Barry Zito is pitching well.  If Lincecum straightens himself out, lookout.  There isn’t a night where they will be expected to lose.  Their bullpen is very good too.  Honestly they were worse when Wilson was closing.
The Giants are winning now.  They’re doing what the Dodgers were doing earlier: beating the inferior teams.  As they hovered just below .500 for much of the year, I saw this stretch of games against the likes of San Diego, Houston, Oakland, and the Cubs and realized that would be a good time for the Giants to pick up some wins.  To their credit, they did just that.
The Giants offense doesn’t impress much, but it’s much better than last year’s major league worst in runs scored and on base percentage.  Melky Cabrera is having a career year and the Angel Pagan pickup has worked out.  Posey has rebounded from injury and let’s face it, with that pitching staff of theirs, they really don’t need a lot of offense.
Shierholtz, Theriot, Belt, Crawford, Huff, Pill and Burriss are doing next to nothing statistically, so there are a lot of holes in that lineup.  Certainly, very few bats to fear.  Deep down, we know we have the superior team, with the Dodgers superior offensive talent and better defense.
Defense is where these two teams separate.  The Giants by far have committed the most errors in the league (57) with the Dodgers having committed 40.  Posey has his issues behind the plate.  Pagan has difficulty patrolling the spacious outfield of AT&T Park and Crawford has been about as erratic as Dee Gordon at SS, though he doesn’t have Dee’s tools.  Lately though, the Giant defense has been slowly improving. 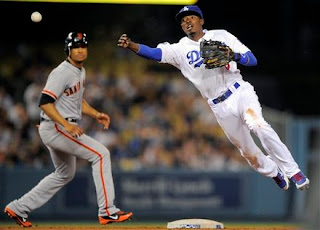 So I can argue each point to show that the Dodger club is better than San Francisco and even can show that the Dodger team ERA is superior to the Giants in this 2012 season.  Truth is though, these two teams have only played each other 3 times so far and the season in the balance may be decided in the crucial head to head matchups between them.
15 games remain between the Giants and Dodgers.  If one team dominates over the other, that will be the difference maker.  That’s the way things should be.  Dodgers-Giants head to head to decide the title.  I believe that when the smoke clears at the end of this season these two teams will be 1-2 for the best record in the National League.  Again, as it should be.
The last three games of the year, (Oct. 1-3) are at Dodger Stadium with the Giants.  2012 has the makings of being a season that’ll be remembered for years.
Posted by Evan Bladh at 8:21:00 AM