I never have had an axe to grind with the Angels.  Gene Autry was an extremely nice man.  I felt kind of sorry for him because saavy Walter O’Malley took advantage of the Singing Cowboy.  Do you realize that O’Malley charged him $300,000 to buy the rights of the name “Angels” because he owned them, even though he moved the L.A. Angels minor league team to Spokane, Washington?
The Angels always seemed to be snakebit for so many years.  An organization beset with tragedy.  There was Lyman Bostock, tragically killed by a murderers bullet intended for someone else.  Donnie Moore, who took his own life.  Nick Adenhart, his life cut short by a drink driver.  There was the 1992 bus crash that almost killed Manager Buck Rogers and injured a dozen players.  Then the painful close calls where they fell within a whisker of the Fall Classic in 1982 and 1986.
I remember it all being so close in ’82 that Reggie Jackson was embracing Gene Mauch in preparation for their pennant winning celebration that was never to be.  The baseball Gods were cruel to Angel fans.  They couldn’t catch a break. The Bosox had no business defeating them in the ALCS that year when they were one strike away from the pennant.  Free Agents came in and swore they’d win one for the “Cowboy.”  Carew, Baylor, Grich, Lynn, Campaneris, Jackson, all couldn’t get it done.
You can’t hate the Angels.  Yes, their fan base can be annoying, especially since their successful run in the past decade, but we all know that much of that success was the result of a Dodger coaching staff made up of Scoscia, Hatcher, Roenicke, Ebel and Griffin.  All those guys should have been with our club, but the Fox regime alienated them all and they left.  For heaven's sake, this is the franchise that kept the 2002 Giants from winning a World Series.  Kudos to them for giving us the joy of watching Giant fans suffer.
How can you dislike class acts like Nolan Ryan, Frank Tanana, Rod Carew, Bobby Grich, Tim Salmon, Don Baylor and Troy Percival?  I can’t think of anything negative to say of them.  They were all great players.

Yes, it took the Angels thirty years to come up with a consistent uniform and color scheme.  Then they screwed that up by choosing “red,” which I suppose was better than periwinkle.  I agree that the rally monky is annoying and lame and speaks volumes to the intelligence of their fanbase.  Yes, it’s ridiculous that they use Los Angeles as their geographical identity even though they play in another city and county.  But I can’t dislike the Angels.  I respect them because they have absolutely owned us in interleague play. 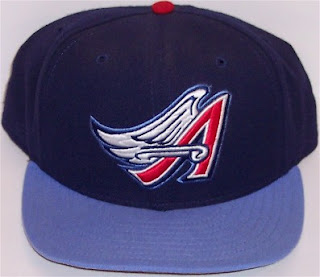 That ownage continued for one and three quarters games into this years inter-league schedule, until Andre Ethier and Juan Rivera provided clutch hits in the bottom of the eighth in tonight’s 5-2 win.  It looked like defensive miscues were going to give the Dodgers a second consecutive home defeat to the Halos tonight.  Adam Kennedy, Dee Gordon and Juan Rivera did their best to hand the game away in earlier innings.
So, here we are, the Dodgers send Nathan Eovaldi to the mound against the boys from Anaheim.  Can the young hard luck rookie get his first win of the year?  We are that close to a series win against the Angels.  Something that has been a rare sight this past decade.
Posted by Evan Bladh at 11:36:00 PM