73 Games in, and Finally a Trip to San Francisco

We are about to witness the Dodgers 74th game of the year, but it's the first one in San Francisco.   This always brings an air of anticipation to the Bay Area.  No matter how competitive each team is, the Dodgers-Giants bring on an exciting atmosphere.  This year, with both team 1-2 in the divison lead, separated by only 3 games in the standings, the buzz is even more palpable. 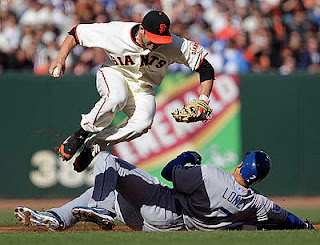 The Dodgers will dodge a couple of bullets in Matt Cain and Madison Bumgarner.  The Giants are fortunate that Chris Capuano doesn’t face them.  The Dodgers come in reeling after losing 5 of 6 to the A’s and Angels while the Giants enter after losing a shocker in Oakland yesterday, just as they thought they would be closing in to within two games of the lead.  If either team sweeps this series, a strong message is sent.  Zito, Vogelsong and Lincecum face Eovaldi, Kershaw and Billingsley in that order.
As the Dodgers enter this series, they reach a crucial part of their schedule that can absolutely bury them if they lose their focus.  Three in SF, four at home against the Mets followed by a visit from the Reds for three.  Then they have a 4 game set in Arizona just before the All Star break.  These fourteen games can make or break the fast start this team had that has placed them in the division lead since the fourth game of the season.
Seventy-three games into the season the Giants and Dodgers must feel like they're in two different leagues, they've barely had a glimpse of each other.  Only three times in Dodger Stadium earlier this month, (a series where the Dodgers won 2 of 3).  Clayton Kershaw summed things up to Steve Dilbek of the Los Angeles Times yesterday saying “I feel like we haven’t seen them.”
As Dodger fans,  few of us have seen the changes to the Giant roster that should be noted.  This isn't the same team as last year.  First, their middle of the order is much better than last year.  Melky Cabrera (.351 BA, .388 OBP, 6 HR, 35 RBI), Buster Posey (.295 BA, .358 OBP, 10 HR, 40 RBI) and Pablo Sandoval (.301 BA, .363 OBP, 5 HR, 19 RBI) usually hit consecutively, making up a formidable three-some to face.  The Giants score runs now.  Not a ton of them, but much more than last season.  They also have 16 comeback wins.
They’ve added a 28 year old outfielder, Gregor Blanco, that is decent defensively who possesses speed and gets the occasional clutch hit.  His addition has been key to shoring up the outfield defense in the vast acreage of AT&T Park.  The acquisition of Angel Pagan (.296 BA, .339 OBP, 5 HR, 25 RBI) is also a significant improvement over last year.  The point being made is that this team isn’t the offensively inept Giants that couldn’t score runs last year.   They rank 11th in runs scored, much better than their last place finish in runs scored in 2011, (by comparison, the Dodgers rank 10th in runs scored).  Brandon Belt has recently found his stride and he’s hitting the long ball now. A few weeks ago, he was on the verge of being sent back down or out of town altogether.
We all know about San Francisco's pitching prowess, but surprisingly, the Dodgers as a team have a lower ERA than San Francisco thus far in 2012.  It can be argued that the Dodger staff is actually better as Barry Zito falls back to earth and Tim Lincecum continues to struggle with a 2-8 record and 6.02 ERA.
Weaknesses?  On defense the Giants 60 errors leads the league.  They are dead last in fielding percentage and their outfield range needs to be exploited.  They don’t turn a lot of double plays.  The defensive range factors of Theriot, Pagan, Sandoval and several others are all in the negative.  You want to hit the ball to Crawford, an erratic shortstop that makes an occasional highlight reel play, but is prone to mistakes.  They don't turn a lot of double plays, something that should be a comfort to the Dodgers unless James Loney strides to the plate.  It should be noted that the Giant defense has improved significantly over the last few weeks though.
Another notable weakness is the Giants bench.  There is no real pinch hitting threat as their only real power threat off the bench, Brett Pill, was sent down to Fresno last week.  Arias (.250 BA, .285 OBP), Schierholz (.246 BA, .314 OBP), Burriss (.212 BA, .274 OBP), and Justin Christian a lifetime .246 are the first players off the bench.   Aubrey Huff is out with injury, probably good news to the Giants.  Freddie Sanchez still hasn’t come back from last years shoulder injury and may never return this season.


In the pitching department, Barry Zito, tonight's starter is 0-3 with a 10.67 ERA in his last three starts.  Santiago Casilla, the San Francisco closer, has struggled in his last two outings also, giving up 5 hits, 4 earned runs and a walk, while only recording two outs.
We all know of the Dodgers recent struggles, particularly on the offensive end, but the Giants haven't been world beaters either the last week or so.  Something has got to give though in this series.  Barry Zito has had recent success against the Dodgers, adn that may be the incentive he needs to right his ship.  Sam can be said for Linceum.  With the Dodgers recent offensive woes, they are prime targets for those two hurlers.
It'll be an interesting set of three in the bay city.  The buzz is in the air.  First place is on the line.  One thing that neither team should forget though:  The Arizona Diamondbacks are sneaking back into this thing.  They're only 5.5 games behind the lead now.