During tonight’s Dodger win over the Rockies,  I was reminded of something.  Watching Jamie Moyer spinning 80 MPH fastballs and lollypop curves as he struck out several Dodger batters reminded me of another pitcher that soft tossed his way back into baseball in the 1970s, but with a lot of controversy.  That was Jim Bouton, who made an appearance against the Dodgers in September, 1978, during the pennant race. 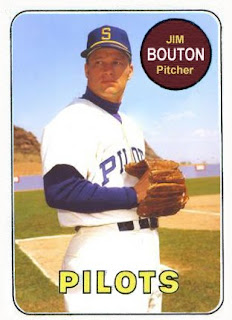 Bouton, a 21 game winner with the Yankees in 1963 (and hard luck loser in Game three to the Dodgers in the World Series) he was attempting to resurrect his career throwing the knuckleball.  Arm injuries had cost him his fastball.  In 1978, at 39 years old, he was making a comeback.  He already had written two best selling books, had been the sports anchor in New York City with the ABC affiliate, and he acted in a failed TV series and had a few cameo movie roles.  But baseball was still in his blood and he felt as if he had unfinished business to accomplish.
Leave it to Atlanta Braves owner Ted Turner to give him a shot.  Bouton was ostracized for the most part by the baseball establishment and additionally the commissioner’s office.  There was an unwritten rule in the locker rooms of baseball that “what was said there and what happened there was to stay there. “ Bouton dared break that “rule” with the introduction of his autobiographical book, Ball Four, that set baseball on its ear in 1970-71.   Ball Four chronicled Boutons 1969 season as he attempted a comeback with the knuckleball with the Seattle Pilots and then the Houston Astros (he was traded mid-season).
As a young boy I remember when his book came out.  My older brother, Eric, had a copy of Bouton’s best seller and he told me not read it because I would lose respect for baseball and ballplayers in general.  Well being a product of the 60’s, the last thing I was going to do was ignore that advice.  I had to read it then.  So in 1971, as a ten year old kid, I read Ball Four.  And seriously I didn’t find it offensive at all.  I heard saltier language on the play grounds of my Elementary School than what I read in that book.  I wasn’t naive enough to think that Major League Ballplayers would behave like choir boys.

But Bouton became a pariah to the baseball world.  His career, which was hanging by a thread, was essentially over once that book came out.  Commissioner Bowie Kuhn was not amused by its revelations and was highly critical of it.  Former Yankee, Pilot and Astro players and coaches felt betrayed, though Bouton told everyone what he was doing.  Nobody really believed that he’d actually go through with it and publish it.  Ball Four was the talk of everyone in ’70.  Fans questioned if Bouton exaggerated facts.  Certain ball players called him a liar.  Others just laughed it off.  Of course, every word of it was true and if you were to look at it today, the revelations of Ball Four seem rather tame.
By the late 70s, several players were putting out kiss and tell books and they weren’t nearly as good, usually penned by ghost writers.  Bouton was the pioneer who dared take on the baseball establishment.  Sportswriters such as the New York Columnist Dick Young were exceptionally critical of Bouton.  Few gave him credit for his pioneering efforts.  It was obvious that Bouton was intelligent and opinionated.  He certainly could write.  He had a cerebral, “smart-alecky” quality to him that challenged the baseball establishment that was endearing to many of his readers.  I, as a young boy, was one of them.
I remember presenting a book report in 7th grade English class on Ball Four, only to get lambasted by the teacher, who turned out to be a Yankee fan.  He gave me a “C” and I’m fairly certain it was because he hated the fact that this punk pitching knuckleballer was tarnishing the image of his hero, Mickey Mantle.
Anyway, back to 1978.  Bouton was making a comeback and Ted Turner gave him a shot.  His knuckleball was effective in AA Savannah that year, where he was 12-9 with a  2.77 ERA.  Many considered it a publicity stunt by Turner to agree to have Bouton included as a September call up with the Braves that year, who were 23 games out of first place.
When Bouton was called up to Braves, his Savannah Braves teammates were said to be as supportive and caring to the old timer as any player ever called up.  Stu Livingstone, then a 23-year old teammate, said “there wasn’t a player on the bus who didn’t talk up for Jim, who didn’t want him to show all the doubters what he could do.” 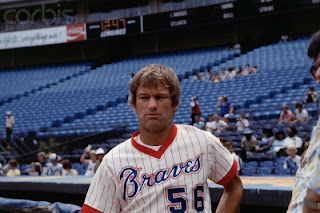 So who did Bouton draw in his first assignment on September 10, 1978?  Why the first place Dodgers of course.  Teams in the pennant race protested.  Cincinnati, and San Francisco complained to the Commissioners office.  The Braves agreed to start Bouton against all teams that remained in the pennant race.  Davey Lopes, then the Dodger second baseman called it a “joke” and “disrespectful to baseball.”  Words that I thought of when Bouton proceeded to strike Lopes out to start the game.
Bouton shut down the Dodgers for the first three innings with his dancing knuckler and 70 MPH fastball.  Jim later admitted that he knew going to the mound that day that he would have some trouble because his knuckleball didn’t have it’s normal movement.
He frustrated Dodger hitters early on and Reggie Smith was ejected for arguing balls and strikes, but in the 4th inning the floodgates opened and after a couple of walks and a single by Steve Garvey, Rick Monday hit a 3-run homer and and by the 6th inning, Bouton was out of the game trailing 6-1 in an eventual Braves loss.
Jim’s next faced the second place San Francisco Giants 5 days later in San Francisco and had much better results, tossing 6 innings of 3 hit ball for a 4-1 Braves victory at Candlestick.
He took a turn against Houston in his return to the Astrodome, 8 years after the Astros released him, a satisfying 3-2 Braves win, though he didn’t get the decision.  Again, he proved he actually belonged in the big leagues pitching 7 innings, giving up 2 earned runs and only five hits against Houston and James Rodney Richard.
He turned up being a hard luck loser in a 2-1 loss against the Big Red Machine in his next turn, this time going 8 innings, allowing only 2 earned runs again and five days later in his  final major league appearance, he faced the Red again, this time getting hit hard in a three inning effort.
Overall, Bouton finished the September experiment 1-3 with a 4.97 ERA, but he really pitched much better than his record indicated and had his final start been thrown out, the numbers would have looked much better.  It was a worthwhile accomplishment of a dream for Jim, after spending two years riding minor league buses again in his late thirties in an effort to return to the big leagues.
Some facts about Bouton that you may not know:
*He created the popular bubblegum, “Big League Chew.”  Shredded bubblegum in a pouch.  From Jimbouton.com: 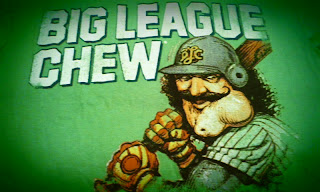 *Bouton reached out to Mickey Mantle with a condolence card following Mickey’s sons death in the early 1990s.  Mantle, called Bouton back with a heartfelt thank you and carrying no grudge against his former teammate.  Jim says it was a moment that relieved a lot of pain to him since many of his former Yankee teammates had ignored him over the years.
*Following the tragic death of Bouton’s daughter in a 1997 accident, the Yankees invited Jim back to Yankee Stadium to participate in an old timer’s  game.   In an emotional moment, Bouton received a standing ovation and was embraced back into the Yankee fold.  This move also broke the ice between the rift the Steinbrenner’s had with Yogi Berra, who returned that same year to Yankee Stadium.
Quotes attributed to Jim Bouton:
“Baseball players are smarter than football players.  How often do you see a baseball team penalized for too many players on the field.”
“You spend a good piece of your life gripping a baseball and in the end it turns out that it’s the other way around.”
“The reason I believe that baseball calls itself a game is that it is too screwed up to call itself a business.”