The Red Birds Arrive and So Does Inter-League Play

This weekend’s Dodgers-Cardinals series should be the showcase of baseball.  A three game series between the top two teams in the National League.  Last year's early season series between the Cards and Dodgers was a couple of blow out wins by the Red Birds followed by a dramatic Sunday afternoon walk-off Dodger victory on a 9th inning Matt Kemp home run.  At the time, St. Louis looked like a power house, but they slumped as the season wore on.  When the Dodgers swept them in St. Louis in August, I thought they were done.  It was after that Dodger sweep in the River City that the Cardinals went on a 23-9 run to reach post season play where they went on and won the whole thing.
The Cardinals arrive with the most potent run scoring offense in the National League.  They will be a true challenge for this Dodger pitching staff.  They lead the league in runs scored, homers, slugging % and OPS.   Cardinal pitching falls in the middle of the pack in most pitching categories while the Dodgers only trail Washington with the best posted league ERA.    Defensiveiy, both clubs catch the ball.  They are ranked 1-2 in fewest errors committed and fielding percentage, while the Cards are particularly adept at turning the double play, having 44 compared to the Dodgers 28 on the season. 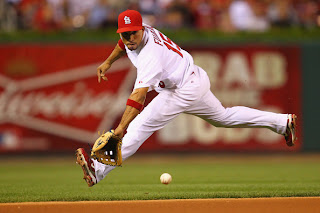 Last but not least, old friend Rafael Furcal arrives with all .367 BA and .430 OBP of him.  Off to the greatest start of his career,  Furcal is happy in St. Louis and injury free.  Dodger fans should be happy for him too.  He was always a stand up guy and a Dodger that gave 100%.  He got his World Series victory and he's excelling over there.  Good for Raffy, I hope he can keep it up.
While we talk about this Series between Division leaders, Inter-League play gets the national headlines.  Games between the Phillies-Red Sox, Giants-A’s, Cubs-Whites Sox and others are the news of the baseball world this weekend.
I can live with Inter-league play.  I don’t really like it, because I’m a traditionalist and I think it takes some of the novelty away from the World Series, but I can live with it.  I also have issues with the inequity of the schedule that is caused by some natural geographical rivalries that MLB has marketed between teams in same markets, but I understand that play between the two leagues during the regular season is what the fans wanted.  What I can’t understand is this.  How is it that MLB has not ever scheduled one of the most intriguing and storied Inter-League rivalries in its 15 years of Inter-League Play?  Yes, the Dodgers have not traveled to the Bronx and played the Yankees at Yankee Stadium.
I simply find it unbelievable that it hasn’t happened.  It’s an indictment of the oversight of Bud Selig and his administration that the schedule makers have never made it happen.  How can it be that the Dodgers have traveled more than once to such American League Ball Parks as Chicago, Oakland, Seattle, and Texas, but never once to Yankee Stadium?  Why didn’t the schedulers make it happen during the last year of old Yankee Stadium? Didn’t 1941, 1947, 1949, 1953, 1955, 1956, 1963, 1977, 1978, 1981 create enough history and rivalry to make this a marquee inter-league match?  Fans have been deprived of a Dodger - Yankee Bronx matchup now for 32 years.  Yes, the Yanks have come to Dodger Stadium twice since Inter-League play began, but never has it been the other way around.
You would think that this isn’t the only Inter-League match-up that hasn’t occurred since the play between leagues started in 1997.  Certainly there have been others.  The answer: WRONG.  Every team in the Majors has had at least one home and away series with each team in each league except for the Dodgers - Yankees.
This is incredible oversight.  An unbelievable omission.  For a sport that is concerned about revenue and popularity, it is unfathomable that this series hasn’t occurred.  The revenue lost alone is enough to make you shake your head for a Dodger Yankee Series at the Bronx would certainly result in sold out games.  Do you think the Rockies or Astros sold out Yankee Stadium? I don't think so.  Maybe the Dodgers will play in the Bronx next year, or better yet...this October.