I must say that I write this in a very frustrated state.  Probably not for the reasons you may think.  Yes, the Dodgers are faltering and in a difficult position with the recent turn of events.  But my frustration stems from the fact that I just finished writing a lengthy post only to realize that I failed to save it properly and I lost the entire thing.  So I start this over from scratch.
What I wanted to convey to readers of this blog was this:
As the Dodgers complete this current seven game homestand, today's final match with the Brewers is a big one.  It's a big one because they really don't want to depart on what many consider to be the most brutal and grueling road trip on a 4 game losing streak.  We already know they'll be leaving with their best player about to enter on a lengthy disabled list tour again.  This fact was confirmed by Mr. Kemp's post game quotes last night.
This writer didn't express major concerns when Kemp went down in early May.  I felt that the Dodgers could potentially build on their lead at the time.  Those predictions turned out to be correct.  Unfortunately, I don't feel so optimistic this time around.  The primary reason is that the current state of Dodger starting pitching is in sad shape.
Ted Lilly was probably the best starting pitcher on the staff through Mid-May.  Now he is probably gone for a prolonged period and even if he returns, a shoulder injury isn't something that many pitchers return from at 100% form.  Chad Billingsley has been consistently bad now for several starts and appears to be suffering from a crisis of confidence in his stuff.  Now staff ace Clayton Kershaw is battling through a difficult stretch.  As positive as we all are in Nathan Eovaldi, it is important to remember he is a rookie and he certainly can't be expected to carry this veteran team. 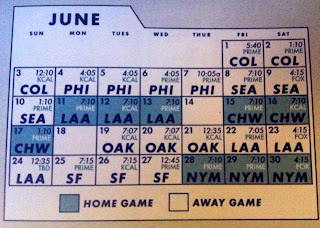 So here we are.  The Dodgers stand with a .640 winning percentage.  The best in baseball and the largest lead of any division leaders (tied with Texas) with a 5 1/2 game advantage.  That lead seems rather precarious as the Dodgers depart for Colorado, Philadelphia and Seattle.  Would you rather be 5 1/2 games out of first?  No way.  There are certainly difficult times ahead in these remaining 112 games.  Regardless of the problems that currently exist, we should all be happy with their position through 31% of the season.  But a win today and leaving with a 6 game lead would really be a moral boost.  At least for that flight to Colorado.
Billingsley goes to the mound today against Zack Greinke.  A quality start from Chad would be a real good thing.