Note: The Dayton Daily News did a piece on Walter Alston on May 4th, written by staff writer Tom Archdeacon.  I highly recommend it to all fans of Dodger history.   Linked Here 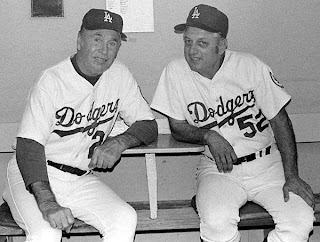 I’m sure he wore that crooked grin on his face.  The veteran baseball manager who was known for his soft-spoken manner and cerebral qualities.  Looking at his volatile and emotionally charged third base coach.  He had convinced him to do something he didn’t really want to do.  Walter Alston and Tommy Lasorda.  Two future hall of famers.  Two Dodger managers that were polar opposites in personalities and mannerisms.  One scared to death and grateful to be alive.  The other, laughing at what he had put his eventual successor through.  More on this story later... 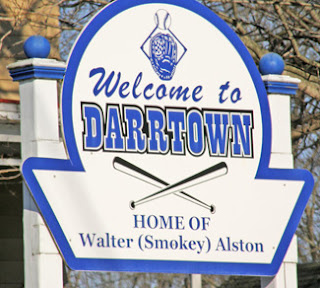 It was the mid 70s and the Dodgers were making one of their frequent trips to Cincinnati to play the Reds.  Whenever an off day coincided with a Dodger trip to Cincinnati, Walt Alston had made it an annual tradition to bring his ball club, complete with players and coaches out to his hometown, Darrtown, Ohio for a grand day in the small town he had grown up in and loved.  Darrtown is 34 miles north of the Queen City and it was Alston’s winter home.  It was a community that he never abandoned after all those years in the limelight as manager of the Dodgers.  The annual Dodger team trip to Darrtown was a “festival” of sorts for the little unincorporated town with a population of around 10,000 at the time. 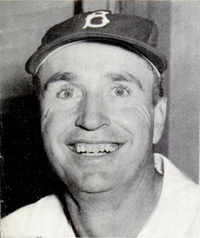 The women from the Methodist church would prepare a picnic festival for everyone.  Walter’s daughter and son-in-law would prepare a humongous barbecue feast.  Many from the community would arrive at a city park for a day of good food, stories, baseball festivities and autographs.  Walt’s wife of over 40 years, Lela, would organize much of the event and bake numerous homemade pies.
To Alston, Darrtown and the surrounding county was home.  He grew up there.  He married his High School sweetheart there and he even taught high school there.  Harry Ogle, Alston’s son-in-law, who married Walt’s only child, Dodie (who passed away last year) reminisced recently about his famous father-in-law:  “He couldn’t wait to get back here when the big league season ended.”  Walt would indulge in his hobbies that included woodworking and carpentry, hunting and shooting pool. 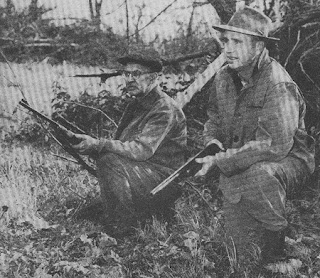 Stories are told that Walter was a bit of a pool shark dating back to his younger days.  The story told is that while teaching high school in the region in the 1930’s, Alston would send his wife and daughter to the movies while he’d play billiards at the local pool hall in the evenings.  He’d always win and take his wife and daughter out to dinner with his winnings when they’d get out of the picture show.
Ogle is in possession of Alston’s pool table and surrounding benches and tables, made by Walter’s hand himself.  The legs of benches were made of authentic bats from his Dodger days.   Baseball memorabilia from his 23 seasons as Dodger manager are found throughout his home.   Walter’s grand daughter, Kim Ogle, still possesses original catching gear that was gifted to her from Roy Campanella.  Kim says today “It was gigantic on me, but I wore it all around.  I was always the catcher with the kids in the neighborhood.” 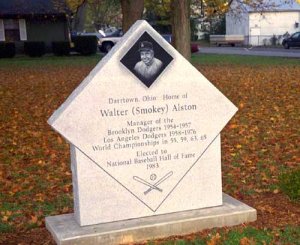 Darrtown has a monument commemorating it’s favorite son in it’s townsquare and signs that identify it as the home of Walter Alston.  Though Walter died 28 years ago, (he'd be 100 years old if her were alive today).  He certainly isn’t a forgotten man.  Miami of Ohio University, Walter’s Alma Mater, honored him earlier this month, inviting his surviving family members to be present while they mounted a plaque commemorating his accomplishments.
Oh, I almost forgot...the Alston-Lasorda story from that visit to Darrtown in the mid-1970s.
Walter decided that he was going to give Tommy a ride on his motorcycle.   It took some coaxing, but eventually he got Lasorda to agree to riding with him.  Alston took him out on a country road and opened it up full throttle to speeds that gave Lasorda the fright of his life.
Harry Ogle remembers the event.  “I remember dad telling Lasorda he’d give him a ride.  Tommy didn’t want to get on, but he finally did and...dad got it up to about 90 MPH.  Well it scared the hell out of Tommy and he said ‘Never again!!’”

All right, Miss Tulsa, put away those poison pen letters for a minute and take a letter to Walt Alston. Send it care of the Dodgers. I don’t think Darrtown has a post office yet. Mark it  “Unurgent” and sign it “Affectionately.”

See I told you it wouldn’t last. That O’Malley is a fickle character who changes skippers on a whim every 23 years.

I’m going to miss our little chats on the infield fly rule and the balk motion. I was just beginning to get the hang of it. I don’t think we ever once discussed anything that didn’t go on between those white lines out there. I don’t know whether you’re Republican or Democrat or Catholic or Protestant and I’ve known you for 18 years. I never heard you tell a lie, saw you take a drink or talk about anyone behind his back. I heard three generations of your players cut you up - usually after their third martini or while trying to impress the lady on the next bar stool.

I’ll never forget the time on the team bus a bunch of guys were discussing some bistros in New York and you said with a perfectly straight face, ‘What do people do in night clubs?’ They looked at each other for a moment but, when the answer came that they sit there and drink, you shook your head and said, ‘They could do that in their room - at no cover charge.’

I know you didn’t spend all your life making fudge and bobbing for apples - you could cuss like a ferryboat captain - but if you had any major hang-ups, I never saw it. You were testy with me on a few occasions, but that was before you came to appreciate the vast knowledge of baseball that I have accumulated. Let’s face it, Walt; you could never have won those pennants without me.

I’m going to miss our little jokes about Darrtown. You know. ‘We don’t have an airport, but we have a birdbath.’ ‘Darrtown’s international airport has ducks in it.’ ‘The train only stops here when it hits a cow.’ ‘We don’t have a street, but the trees are blazed.’ ‘Main Street is the ploughed field without corn in it.’ ‘We don’t have burlesque; but the widder Brown leaves her shades up.’ ‘They would have put a traffic light on Main Street, but the cows are color blind.’ ‘An energy crisis is when your mule dies.’

I never got the impression you were afraid of a damned thing. And that went for 220-pound left fielders or the job stealers the owner use to hire under you to put a little Broadway in the act. Next to you, they were showed up as the petty little back-alley schemers they were. It was like a bug biting an elephant.

You were a college graduate with a teacher’s degree, but you used to say ‘extry’ all the time. You were as Middle Western as a pitchfork. Black players who have a sure instinct for the closet bigot recognized immediately you didn’t know what prejudice was. You were as straight as John Brown’s body. There was no ‘side’ to Walter Alston. What you saw was what you got.

But, I guess the thing I’ll always remember is that you never had to worry about what sort of ‘mood’ Walter Alston was in. You were as approachable as a hunting dog. As long as I live, I will never forget that dressing room in the playoff of 1962, when the Dodgers blew a 9th inning 4-2 lead and the pennant. The players locked themselves in and passed the bottle. You came out, dry-eyed… and dry throat and talked to us, then went over and congratulated the Giants and Alvin Dark. You had won a playoff, too, three years before.

I sat with you through 10-game losing streak in 1961 and never once saw you bust up a locker or punch a newspaperman. That’s why, when you turned on a newsman this summer, I couldn’t have been more shocked if they caught St. Francis of Assisi poisoning bread crumbs.

Your life is summed up in Jack Tobin’s biography ‘One Year At A Time.’ I don’t know of anybody leaves his profession with more respect. You took a four-straight loss in the ’66 World Series with a shrug. You had won in four straight, too, three years before. You didn’t panic when they took your slugging team from a bandbox in Brooklyn to the Coliseum in L.A., which was about as suitable for baseball as a deck of an aircraft carrier. You won a pennant on that aircraft carrier the second year.
I used to laugh when someone would say, ‘Why shouldn’t Alston win with all that talent?’ and I’d say, ‘Yeah. Too bad he doesn’t have some better baseball players to go with that talent. I think you ran that wild animal act that was the Dodgers about as well as it could be run without a whip and a chair.

So, I’ll be seeing you, Walt. Give my regards to beautiful downtown Darrtown. I don’t know what time your stagecoach gets in; but, when the natives ask you where you have been for the past 23 years, tell ‘em you found seasonal work in Californy. But, don’t tell ‘em what happened to Custer.

The corner of the dugout is going to look funny without you there, next year. I only hope the Dodgers don’t, too.