The Beard Retires...A Dodger that Bonded the Team Together

Today Casey Blake officially retired and I think it is appropriate to acknowledge what a great influence he was to the Dodgers.  He was a true teammate.  I dare say that Blake is partially responsible for making Matt Kemp the player that he is today. 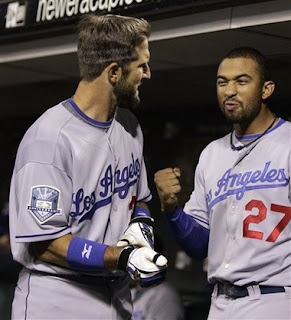 Casey Blake showed Matt Kemp the ropes.  Though there was a noticeable age difference, the two struck up a wonderful friendship.  Maybe it was because they were two boys from the midwest.  Perhaps because they understood each other.  Probably because Blake was the type of veteran that unlike players like Jeff Kent and Luis Gonzales, made it his mission to help groom some of the talented youngsters into true major leaguers.
When Matt Kemp responded that his offseason was great during 2010 Spring Training, Blake interrupted and said "Are you kidding, did you see the magazines?" while holding up a tabloid with Kemp and Rihanna romping at a beach resort in Cabo.  It was stuff like that where Casey would break up the clubhouse.
Matt Kemp summed up Casey Blake in 2009, a few months after he came over in a trade.  “How can he not be making me a better player when he’s always telling me how great I am?  I know a great dude when I see one,” said Kemp who spoke of Blake who he noted as a great husband and father of four young girls.
Casey Blake came in to a new clubhouse in 2009 and immediately made an impact.  He joked with the Latin players and danced to their music.  He tried to speak spanish with them.  He would sing hip hop tunes with Orlando Hudson.  Then he’d give hunting tips to Jonathan Broxton.
Blake was a clubhouse guy.  The most unselfish of players.  Some referred to him as a “Glue guy.”  The type of player that bonded a team.  I can’t recall a player arriving at mid-season and in such a short period of time having such a positive influence in unifying a ball club.
Many of us fans dubbed him “The Most Interesting Man in the World,” and “Thirtsy” for his resemblance to the iconic Dos Equis Beer pitchman.  His beard became a fan favorite and soon “In Beard We Trust” t-shirts could be found around Dodger Stadium.  Casey's teammates in Cleveland called him “Chin” in reference to his Jay Lenoesque feature.   His Dodger teammates called him “Gamer” because that was a perfect description of what he was to them.  Simply a clutch performer those first two years with the ball club before injuries cut him down and cost him his career.
Whatever he was called, Casey was the consummate professional and an unselfish player.  A humble player that didn’t become a regular until age 29 and a Dodger until age 35.  Remember game 2 of the NLDS against St. Louis in the 9th inning, how he worked that key walk after starting off the at bat 0-2 by fouling off pitches?  It was pure clutch.  How many guys rattled a pitcher to commit a walk-off balk?  Casey did.
He was a player with integrity.  His college coach at Wichita State claims that his team approach was the best he ever saw in all his players.  He backed his team and would fight for them to the end.  As a Dodger, Blake was the kind of player you wanted besides you.  He respected the game and expected opponents to do the same.  When he called out Giant closer Brian Wilson for his showboating gestures, he made no excuses.  “I don’t like when players make gestures or do stuff like that on the field,” he said the day after mocking Wilson’s gestures following a clutch homer that he hit off Wilson.  “The only guys I’m going to have a problem with are guys where it’s very obvious that they only care about themselves and their own performance.”
Blake will make a good manager one day and I would hope that the Dodgers would consider putting him in their organization.  When he arrived to the Dodgers, he immediately assessed the situation and glued the team together.  The players weren’t communicating.  The old guard wasn’t talking with the new guard.  There were cliques.  Joe Torre had a divisive clubhouse and did little to correct it.
“It was awful - that was sort of their downfall,” said Blake.  He cared enough though to mold the team together.  He was smart enough to deal with the younger guys through positive reinforcement.   Link to Hannah Kamp Wall Street Journal Article on Blake
I’m not saying that the Dodgers in 2009 and 2010 won because of Blake, but I will say that he played a huge role in unifying the guys and getting them on the same winning page.
So on this day that Casey Blake officially announced his retirement I praise him and thank him for his contributions as a Dodger.  Casey wasn’t the most talented guy on the field, but he was definitely the grittiest.  Enjoy retirement Case, enjoy the kids, the family.  Stay gritty my friend.  Hopefully we see you in a managerial capacity in the near future. 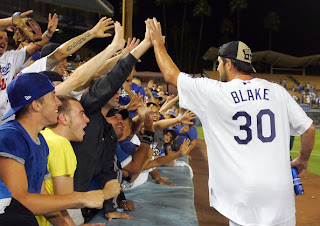