A "Lilly" From the Dodgers on Mother's Day

I know that Ted Lilly is 4-0 with a 1.41 ERA so far and that is comforting, but I still feel uneasy about him starting a Sunday day game at Dodger Stadium.  Day games, when the balls carry in the Chavez Ravine air.  With the likes of Gonzalez, Tulowitski, Cuddyer and Helton carrying the big lumber, let’s hope that Ted can minimize the damage and keep the ball in the park. 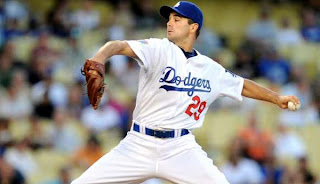 Meanwhile, the Dodger hitters break out the pink bats this Mother’s Day against 23 year-old Alex White.   White will be facing the Dodgers for the first time in his career.  He’s a young rookie and one of the players acquired by the Rockies in exchange for Ubaldo Jimenez at mid year last season.   White was the hard luck loser against the Padres in his first start this year, giving up 2 earned runs in 6 1/3 innings.  He has a fastball that sits between 89-93 MPH.  A first round pick out of UNC in 2010.  He throws a splitter, silder and fastball.
The Dodgers seem to have a history of struggling initially against guys they haven’t seen before.  Let’s hope that trend changes.  Perhaps Matt Kemp will break out of his slump.  Two of his long balls died on the warning track in the heavy night air last night in the Dodgers 2-1 win over the Rocks.
Happy Mother’s Day to all the moms out there.  Have a wonderful day!