With all the troubles that the bullpen has had of late, I find it surprising that the Dodgers remain in first place, (and by a rather comfortable margin at that, being only 28 games into the season).  When you examine things a bit closer, if it were not for that hot 9-1 start, where the bullpen performed admirably, this club would be a .500 team, (Since then the Dodgers are 9-9.  I hate to be a person that dwells on negativity, but the reality of the Dodger pitching staff is that the bullpen leaves a lot to be desired. 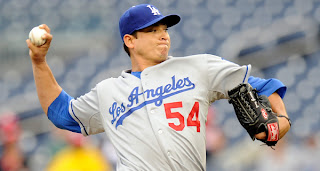 Javy Guerra
The Dodger closer is struggling.  He’s being hit hard.  He’s walking guys.  His confidence is gone and he’s blowing saves. The pitch selection he uses is questionable.  He’s leaving balls up that are very hittable.  He has lost his swagger.  It is possible that the league has figured him out and he needs to make adjustments.  The next few weeks will be the true test for Guerra.  Can he rebound from this rough patch or will he end up in Albuquerque eventually?
Scott Elbert
The Dodger lefty specialist can’t get lefties out. They are hitting .429 against him.  Right handed hitters aren’t far behind, batting .400. Elbert has an ERA of 6.75.  Even when Elbert records outs, he has been hit hard.  It’s disappointing to see him regress.  Elbert had so much promise just a few years ago.
Jamey Wright
Though he has had a few moments of brilliance this season, Wright has been tagged with two key losses and periodically has outings where he simply can’t get anyone out (such as today).  A Dodger bullpen that is dependent on journeyman reliever Wright is in trouble.
Todd Coffey
Unimpressive aside from a couple of weeks early in Spring training.  The Coffey experiment needs to end.  I really wanted him to do well.  He is a great clubhouse guy and a positive story.  But if he can’t get outs, its time to go.  His 13.50 ERA tells the story.  Yes, he’s only pitched 2 2/3 innings but he hasn’t been able to get outs since mid-March in Spring Training.
Ronald Belisario
His one inning this season resulted in retiring the side with consecutive outs.  So far so good, but can we really be dependent on this guy.  Past issues with drugs, alcohol, and overall integrity makes me question management’s decision to give him another shot.  They love his stuff.  When that sinker is on, he’s as valuable as can be, but it has been 3 years since 2009.  One good outing has not made a believer of me yet.
The remaining guys, Kenley Jansen and Josh Lindblom have been steady.  But a bullpen of two doesn’t bring much confidence to the table.  This Dodger club will have to have improved relief pitching if they expect to remain in contention.  The starting staff has carried this club, but we can’t expect that to last forever.  Is there help available in the minors?  Albuquerque’s closer Josh Wall (1-1, 4.15 ERA,13 IP, 4 saves), Chattanooga’s closer Shawn Tolleson (0.84 ERA, 10.2 IP, 4 saves, 18 K’s) have started the season well.  Then there are starting pitchers Nathan Eovaldi, John Ely and Mike Antonini that could be moved to the bullpen if needed.  But seriously, there isn’t anyone that is a true reliever with MLB experience that is available in the farm system.
I love the fact that this team is 4 games up in  first place, but the bullpen has to be a concern to us all.  Back to L.A. to take on the hated ones for three.  This is an important homestand against two division rivals.