Some Thoughts on the Torre Ownership Group

Well I have had 36 hours to digest the possibility of Joe Torre returning to the Dodger fold and I must say, I have conflicted feelings about it. I was unhappy with the way Torre’s tenure as Dodger manager ended.  He arrived with a reputation of a guy that communicated with his players and had good rapport with them.  He was known as a chemistry and confidence builder.  In my opinion, on all those counts, Joe was a failure.  He destroyed Broxton both physically and mentally in an attempt to win a meaningless nataionally televised game against his former team.  He placed coaches on his staff that were old school and unable to relate to modern day players, thus alienating such stars as Matt Kemp, Orlando Hudson, and even Manny Ramirez at the end of his Dodger career. I won’t continue on this rant though.  You get the gist of my feelings on Torre.  He disappointed me, but I think we'd all agree that managing the team is much different than administering it as an owner.
Torre’s resignation from his MLB position must mean that he is dead serious about landing the team.  He must know his group has an inside track at landing the club.  Aligning himself with Rick Caruso and banker Bryan Trott (the guy that Warren Buffett trusts).   Torre may know something all of us do not.  Either he thinks he is going to be the winning bidder or maybe he wasn't happy in his role with MLB and this was his way out.  Either way, it's an interesting development.
One thing is certain though: Joe loves the flash bulbs, the cameras and the microphones.  He craves attention and is a skilled and eloquent speaker.  Perhaps the ownership suite would suit him well.  It fits him much better in my opinion than a seat on the bench as manager.  In case you forgot, Torre had Matt Kemp batting 8th for heaven’s sake. 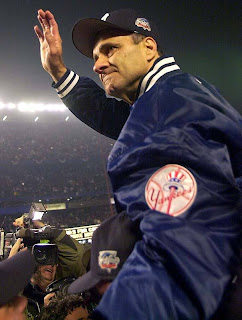 The world will always view Joe as a Yankee.  For me, that’s bothersome.   It shouldn't be, but it bugs me to no end.  The Dodgers deserve their own identity and not one of a Yankee owning the club.  The perception will be that the Dodgers are owned by that former Yankee manager.  I hope that's not the case, but it probably will be.  Deep down, Torre is still hot over his dismissal from the Yankees and he wants to get back at them.  Unfortunately, his grudge match was to the Dodgers detriment a few years back.  I'd rather he go fight his grudge against the Steinbrenners with some other team.
So, as you can see, I'm all over the place with this.  Torre's good as an administrator and handling the media, Torre's bad when it comes to baseball decisions, etc, etc.  I think the bad outweighs the good.  I fear he'd be right thick in the middle of baseball transactions and we all know how he loves the over-the-hill veteran, (i.e. Ronnie Belliard, Scott Proctor).  I could see Joe overpaying for older free agents if he sits in an adminstrative seat.  Would he let his G.M. do his job without interference?
If I had to choose now, I'd go with Magic's group, Dennis Gilbert's group or Peter O'Malley's group over Torre.  If Torre shows that they have the most money to back up the purchase and can go out and spend.  I just may change my tune.  But for now, I'd pass on Joe and I hope that McCourt does too.
Posted by Evan Bladh at 2:52:00 PM