Reggie and Tommy in the Booth.

Two years ago there was an exchange in the Fox Sports Saturday Game of the Week between Tommy Lasorda and Reggie Jackson that I wish I had recorded.  What is provided below is a sanitized version of a heated exchange between the two that this video doesn’t accurately portray.
What really went down?
Lasorda said, “You stuck your backside into the baseball, Reggie, tell the truth.”  When Jackson refused to acknowledge that he had done so Lasorda responded saying, “He should have been decked. He was a liar then and he’s a liar now!”
Jackson mentioned that he earlier in the week  called Lasorda’s office in an attempt to get some tickets and that the voice mail message from Lasorda ended with the quote from Tommy saying that if you don’t root for the Dodgers, you won’t get into heaven.  In reference to the “heaven” quote, Lasorda said that Jackson also won’t get into heaven “for lying.”
Jackson was jovial throughout the exchange while Lasorda maintained that serious demeanor and showed anger that has festered within him for years over that play in 1978.  Tommy was in no mood to joke, saying Jackson was “about as funny as a bloody nose.”  When Buck asked him to acknowledge Reggie’s greatness, referring to the three homer game in the ’77 World Series, Lasorda responded with, “A blind pig will always find an acorn.” 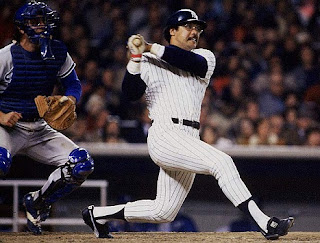 It isn’t really seen in the video clip that was edited by Fox, but there was a sense of awkwardness in the booth.  Both Buck and McCarver weren’t comfortable, with Buck continually attempting play the peacemaker and get Lasorda to admit he was playing around.  Tommy wouldn’t do that.  He was steamed, 32 years after the fact, his wound was not healed.
The only hint that I have that this incident was staged was at the end when they hugged and you can see Lasorda briefly grinning.  Either way, it was an interesting five minutes of television.
The Day Reggie Jackson Hit on My Wife
In late 1988, before we ever met, (in fact it was 8 years before that).  My wife needed needed a car and somehow ended up Reggie Jackson Volkswagon in Palo Alto, California.  She went in and test drove the Jetta.  It was a good fit for her and her young family.  A roomy car with a lot of pep, she just needed to work out the details of the financing. 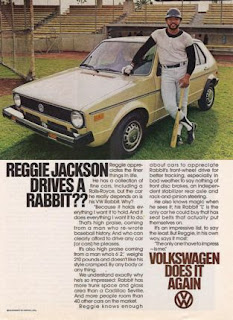 While waiting for the deal to be completed, Reggie Jackson spent a good hour talking with my wife.  Now, she’s a hottie and always will be in my opinion.  On top of that, she’s got a lot of spunk and an outgoing personality, so it is easy for someone to be attracted to her interesting and dynamic demeanor.  The guy owned the dealership, or at least lent his name to it.  It wasn’t as if he was hob-nobbing with all the potential buyers, because ALL his attention was on this twenty-seven year old attractive woman.
Long story short, she bought the car...but Reggie didn’t get a date, she turned him down.  He only batted .500 that day, got the sale, missed out on the date.  A Win/Lose for Reggie.