Ryan Braun Had His Chance to Right a Wrong, and He Blew It

Well Ryan Braun did it, he formally accepted the MVP award at a Black Tie Dinner last night in New York City before the BBWAA.  And he blew it in my opinion.  He could have made things right.  He could have re-earned the respect that he’ll never again have in his Major League career.  This was his opportunity at redemption.   Now those boos he’ll hear all season long and the heckling at visiting ballparks will be well deserved.   He chose to go another route and accept the award in a tainted fashion. 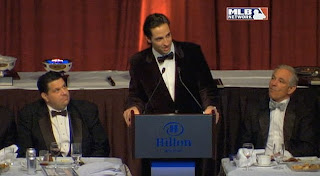 How would you have felt about Braun if during his acceptance speech he had said something along the lines of, “I’m sorry for the controversy I caused.  There is one person that had an extraordinary season, and without a failed drug test, and that’s Matt Kemp.  He deserves this award and I’d like to present it to him.”
Now that would have brought headlines.  That would have earned him respect.  That would have made inroads at resurrecting his reputation.
In his acceptance speech Braun is quoted as saying, “Sometimes in life, we all deal with challenges we never expected to endure.   We have an opportunity to look at those challenges and view them either as obstacles or as opportunities, and I’ve chosen to view every challenge I’ve ever faced as an opportunity and this will be no different.  I have always believed that a person’s character is revealed through the way they deal with those moments of adversity.”  It should be noted that Braun refused to take questions from reporters after the ceremony.
Hmm, Ryan.  Had you lived by the words you just spoke, you would have not accepted the award.  You had the opportunity to make things right before you, but I guess that’s not in your character.  Not like Matt Kemp, who when asked about the controversy, he took the high road and claimed you are the MVP, though deep down inside, he knows what we all know...you cheated.  Now that’s a true MVP in my opinion, A Most Valuable Person.