One of the perks of my job is that once in a while I get to meet celebrities.  Today it was my turn with Joe Buck.  It wasn't more than a 5 minute meet and greet while working, but he was kind enough to quickly pose for a photograph.  I guess he thought what I said was funny, based on the grin.  I must say though, he really is a nice man and very respectful.  He's in S.F. for the NFC Championship broadcast this Sunday 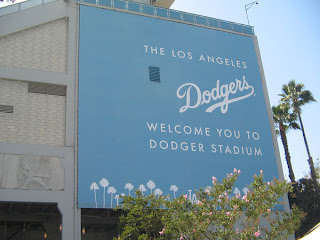 I so hope this is true.  I have to believe it is true.  Will the Dodgers soon be the West Coast version of the Yankees when it comes to spending?  I believe that all depends on who ends up with the club.  April 1st can't come soon enough.
*************************************
In other news:
Brad Hawpe signs a minor league deal with the Rangers.  Frankly I'm glad he's out of the National League because he always seemed to do well against the Dodgers.
Enrique Rojas from ESPN Deportes Tweets that the Oakland A's are interested in Manny Ramirez.  Ramirez's comments: "Cada dia que pasa me arrepiento de las decisiones que tome'." (Translation: "Each day that passes I regret the decisions that I made.")
The latest Dodger signing at Frank and Son, City of Industry: Dee Gordon, tomorrow, 11:00 to 1:00 PM.
Mark Cuban the topic of Steve Dilbeck's L.A. Times  post, quoting the Maverick's Owner that "L.A. would never be the same," if he owned the club.
Posted by Evan Bladh at 5:27:00 PM