Ethier Gets A Big PayDay, Not Bad for a Guy that Can't Hit Lefties 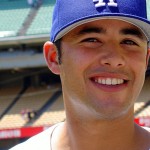 The fact is, Andre can’t hit lefties.  Never has, and never will.  Yeah, I know his dad learned to pitch left handed so that he could learn to hit lefties at an early age.  It’s a great story and it was a good idea, but have you ever thrown, let alone pitched with your weak side?  I have, and it aint pretty.   I’ve got to hand it to Andre’s dad Byron, a fine ballplayer at the JC level level himself, for learning to pitch from the left side.  But  please, it was probably real easy to hit off dad who was tossing lollypops to him from over there.
A platoon of Jerry Sands/Andre Ethier would be a prudent move and worth a few wins in the standings IF Ethier would agree to get on board with it and not sulk.  Does Mattingly have the guts to make such a bold move for the good of the club?  Is Andre honest enough with himself to realize that the club would benefit from having a right handed hitter batting in his place against left handers?  On both fronts, I highly doubt it.
**********************************************************
James Loney was signed for a one-year deal worth $6.375 million plus incentives.  Not bad for him considering his sub-par year and  turbulent off-season activities. 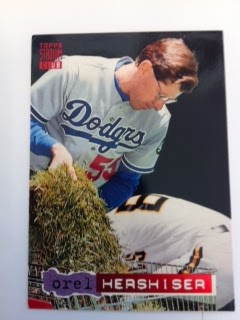 Try to figure this one out.  In this 1994 Topps Stadium Club card of Orel Hershiser, his second to last year on the Dodgers.  Does anybody know what is he doing?  He has a clump of sod in his hand, and there is a shopping cart involved.  Additionally based on the other uniformed player who is unidentified, he is in Pittsburgh.  No need to do any groundskeeping at old Three Rivers Stadium that had artificial turf.
So my question is:  What is he doing? Who is the Pittsburgh player, or is it their bat boy?  Topps puts out a mystery card every now and then, but what were they trying to do here?
Anyone that can solve this riddle gets a Opinion of Kingman’s Performance T-shirt, one of 3 or 4 remaining that I have in stock.  And if you are XXL, you’re out of luck, unless you want to use it for a rag.  I think I have 2 mediums and a large left.
Posted by Evan Bladh at 12:37:00 PM