Puig - Some Thoughts on The Flaws in His Game


I love Yasiel Puig's game and the life he brings to this Dodger team but it would be foolish to not recognize some of the flaws in his game.  Never have I seen a superstar with so much to learn, but such is life for a kid that popped on the scene a year ago with raw talent and virtually no minor league seasoning.  He’s hitting .373 after 234 plate appearances and 55 games.   He has shown off his five tools repeatedly and with all he has accomplished, a number of facets to his game can be identified that need improvement.  In fact, if he were to heed to some of these suggestions and change a few parts of his game, he’ll even be better.

There is such a high ceiling for this amazing player as he matures and develops.  If only we can survive the growing pains that 99% of players had the advantage of learning in the minors, and away from the national stage.  Puig’s mistakes are magnified because the whole baseball world is watching him.

Below are identified areas of Yasiel Puig's game that may need to improve:

Throws
Puig’s ability to throw the ball 350 feet on the fly has also served as a detriment to his development as a major leaguer.  Ill advised throws that are lofted with too much arch, often fly over his cut-off man.  Savvy major leaguers have taken advantage of this as Puig’s attempts to cut down the lead runner have allowed batters to jog into second base with ease.  There’s too much air on his throws as the trajectory is arched too high.  The throws are impressive to watch, but often times the results aren’t productive.   It’s scientific fact that low trajectory throws on a bounce or two arrive faster than airy tosses that get there on the fly.   So for the occasional spectacular outfield assist that he’ll make on every eighth or ninth throw, 4 or 5 base runners have advanced an extra base on him as he overthrows the cutoff man.
Base Stealing
Puig has a tendency to attempt steal third base when there are two outs and he has actually broken the old baseball creed several times, which is to never make the first or third out in an attempt to arrive at third base.  Reprimanded by Hanley Ramirez about this a few weeks back, he appears to have received the message loud and clear and stopped the 3rd base steal attempts.  But there have been several occasions when he has made ill advised attempted steals, and other times when he stayed put at first base when a rally could have been sparked by his legs.  This is something that I hope Davey Lopes can teach him, as it’s difficult to learn the do’s and don’ts of base stealing in the middle of a major league season.

Failure to slide
For some uncanny reason, Puig goes into bases standing up much too often.  The only reasons I can think of that he does this is 1)  in the Cuban Leagues, he’d beat out plays with his legs frequently and didn’t need to slide because of that, 2) he’d so inexperienced, that baseball sense hasn’t kicked in yet.   On more than one occasion I have wondered how he avoided injury as he came in standing and attempted to remain on the base with long stretches and hyper-extensions.   There are times when he’s directed to slide by a base coach or on deck batter and he still comes in standing up.  This will be costly at some juncture in the season and I hope he doesn’t hurt himself in the process by refusing to slide. 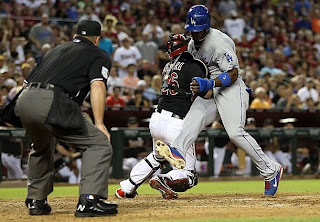 Failure to Pick up Base Coach signals, or ignoring them altogether
Tim Wallach means nothing to Puig.  If he’s on second base and there’s a base hit to the outfield, Puig’s going home, no matter what.  Wallach could throw out stop sticks or toss a barricade in his way, he’ll still run right through them.  He has been cut down at the plate on more than one occasion on ill-advised attempts to score.  Sometimes he has luckily made it when the opposition has dropped a throw or botched a relay.  The good thing about Puig’s aggression is that he forces the defense to make a play, but at this level, they often are successful at that.  Puig is probably used to not seeing that happen at the lower levels of play that he participated in prior to his arrival to the U.S..

Lack of Communication with Teammates when going after fly balls
Andre Ethier and Mark Ellis are shying after fly balls headed in the direction of Puig.  Though the centerfielder is supposed to be the traffic cop out there, that rule seems to go out the window when Puig is in right field.  No one wants to crash into a freight train, who can blame them?  Puig approaches balls at top speed, and he doesn’t always have the greatest route to a play.  It’s great to see him as a take charge guy that is aggressive in going after balls, but Yasiel needs to realize that this is a team game and sometimes, another player might have a better angle to a ball.

A propensity to ignore danger and crash into walls while making defensive plays
There is no wall that Puig shies away from.  He is getting to know all the outfield walls in the League, up close and personal.  The quirkiness of 21st century ball parks are getting to be recognized by Dodger fans since Puig is making plays at them all.  Coors, Wrigley, Busch, Yankee, Petco.  You name the place, Puig has hit the wall.  And the right field foul line walls are seeing dents from Yasiel's body as well. 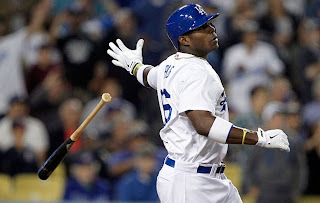 Showboating
This is a cultural phenomenon that may be something that Puig will never change.  In Cuba, they flip bats.  In Cuba, they stare down the opposition.  In Cuba, they non-chalantly catch fly balls one handed with a glove flip.  A lot of things that are taboo in the Major Leagues are simply the norm there.  Want to see for yourself?  Type in “Cuba Serie Nacional” into the search box of YouTube and witness for yourself the antics of ball players in Cuba.  The game is more open and players emotions are there for all to witness.  Nothing is held back.  The opposition doesn’t get offended at things like admiring a home run with a 90 second home run trot.  I think there will always be a certain sector of baseball fans in the U.S. that will never like Puig, because they are ignorant of where he came from.  They’ll interpret his actions as “unprofessional” and  will consider him to be a show off or ego-maniac.  That’s the culture he grew up in.  The game is entertainment and a joy to him.  It's the beauty of it all.  The haters will have to deal with it.

This piece is not intended to speak negatively of the Dodger rookie right fielder.  Fact is  that he might be the most amazing prospect to ever put on a Dodger uniform.  I just point out these weaknesses in his game because as unbelievable as it seems, he can be even better than the .373 hitter that he is today.   The only thing that may deter him from progress is injury.  And if he heeds some of the suggestions noted here, he may be able to avoid them.  It's an exciting time to be a Dodger fan knowing that Puig may be a Dodger for life.
Posted by Evan Bladh at 5:51:00 PM