End of Inter-League Play...Until October That Is 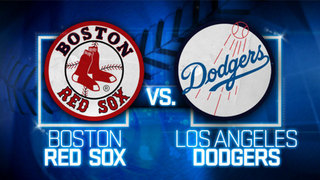 For the first time since MLB instituted Inter-League play in 1997, it may prove to be a disservice to the Dodgers.  That’s probably because for the first time sine ’97, the Dodgers have a legitimate shot at going to the World Series.  If that occurs and the Dodgers do make it to the fall classic, the Boston Red Sox have had their first taste of what the Dodger closer is like, giving them the opportunity to make some adjustments.

Red Sox commentator Dennis Eckersley clearly was unfamiliar with Jansen’s arsenal of pitches.  He repeatedly mention that he expected an explosive fastball in the upper 90s range that would match Jansen’s frame.  Eck had no idea that the Dodger closer had that deceptive cutter and he made it known that the fastball he displayed was not impressive, but the late movement on the cutter was.  With one more game to go, it’ll be interesting to see if the Red Sox make some adjustments in the event that Jansen is called upon again.

On the other hand, the Dodgers didn’t march out Kershaw and Greinke for this BoSox series, which forces them to focus on scouting reports if they face them again in October.  What few will dispute this year regarding inter-league play is that the Dodgers have had their best result at it in their team history.

With a 12-7 record going into their final contest today, the Dodgers beat up on the A.L. East this time around, a division that many consider to be the best in baseball.  Sweeps of Toronto and Tampa Bay were quite impressive.  If the Dodgers pull off the win today, they will have gone 15-0-2 in their last seventeen series.

There is some concern in blogging sectors that the Dodger offense is disappearing again.  A two game drought against two quality Boston pitchers may be the primary cause, but this amazing run can’t be expected to last forever.  Perhaps a little bit of a slump will be welcomed in the long run.

Peaking in August is not what the Dodgers want and as  Arizona keeps losing and the magic number is now dwindled down to 24 prior to tonight’s action, the Dodgers probably have the luxury of time to heal up and be prepared for post season play at close to full strength.  With thirty-three games left and a whole bunch of them after the rosters expand, it may be time to allow some of the banged up vets some decent rest.  If by August 31 the Dodgers maintain close to a double digit game lead with the Arizona elimination number reduced to 18 or 19, It'll be time for management to begin a complicated juggling act of sitting guys, and assuring that they maintain game ready for when the true games begin in early October.

Tony Jackson’s blog, “Dodgerscribe.com” has been up and running for a couple of weeks now.  I’m not intending to offend any other bloggers out there, but It is safe to say that he provides the most comprehensive coverage on the team, both home and road.

When his site becomes a pay per view website during Spring Training in 2014, it’ll be money well spent.  The man simply provides cutting edge Dodger news.  He has updates throughout the day  Fact is, there probably isn’t a need to read anybody else when it comes to the latest news on the team.  He’s on sight and reporting immediately.  We’re real lucky to have this guy and I’m becoming so addicted to his updates, that I wonder how I survived without them before.

So if you haven’t checked him out yet, drop everything you’re doing and peruse dodgerscribe.com right now.  You will not regret it.