Comeback Manager of the Year 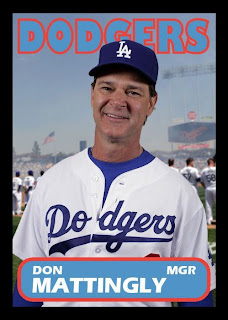 If there was such a thing as “Comeback Manager of the Year,” Don Mattingly would be a shoe in for it.  He’s a survivor as he rode out this early season rough ride into this unbelievable impossible dream of a second half run that many of us believe will result in a championship Dodger team.  It’s a bit premature to be crowning the team with the title, but regardless of how things turn out, there is little doubt that Don Mattingly has performed admirably this season.

On the verge of termination in late May, Don saw the writing on the wall as it was recently revealed that Stan Kasten told him that if things didn’t change course soon, he would be forced to let him go.  The fact that Mattingly handled that situation with maturity and claimed he understood speaks more for his character than any other trait that he possesses.

There will be those that will argue X’s and O’s that swear that Mattingly is a terrible strategic manager, but I don’t intend to do that with this piece.  Admittedly, Don can drive me nuts with some of his managerial moves, but I wouldn’t put him in the lower tier of strategic mangers in the game.  I think he falls in the mold with about 80% of the field managers in the game that make moves by the conventional book.  We know what those moves are.  Giving up outs in exchange for a baserunner in scoring position, making questionable double switches, burning out bullpens too quickly with righty on righty and lefty on lefty matches.  I could write an entire piece on excessive bunting and Don’s infatuation with that play.

What I want to address here is Mattingly’s most valuable asset and that is clubhouse management and team unity.  I’ll go so far as to say that Mattingly might be the best the Dodgers have ever had at that.  I know that’s a stretch when you consider the confidence that Tommy Lasorda instilled in his players, but with Tommy, there were always a few that didn’t buy in to his over-the-top “rah-rah” stuff.  There was always a certain sector on Tommy’s teams that thought he was a bit full of it (and himself).

With Mattingly, there’s no signs of phoniness.  This is a straight forward manager that communicates with his guys.  He backs them up and rarely throws anybody under the bus.  As a result, there isn’t anybody on the staff that wouldn’t jump in the foxhole for the guy.   And that’s what you want your players to do, give a 100% effort all the time. The lone exception to this was right around the time Don was possibly looking at a pink slip and he knew it.  He made some honest statements about Andre Ethier’s lack of effort.  I think that was the one time he thought he was gone and he didn’t want to go down without letting it be known that some weren’t giving their all.   Looking back at that situation, I’m pretty sure that Don regrets that action, because it's simply outside of his character.

We all know of the superstar lineup that Mattingly was handed with the record Dodger payroll.  The difficulty of managing five or six huge egos is often overlooked.   There are times to sit some of them and get them adequate rest in the marathon season.  He is effective in juggling those personalities and penciling in a lineup that keeps everyone satisfied.  With Mattingly he also has a group of bench players that all understand their roles and aren’t griping for playing time.  They understand their value and how they are expected to affectively contribute to the team.  Why?  Because Don has communicated their value to the team.  A guy like Joe Torre would bench a young Matt Kemp and leave him stewing for days without an explanation for his actions.  Mattingly wouldn’t dream of doing that.

The respect Mattingly brings to the team probably stems from his days as a superstar player.  He knows when to approach guys and when to let them be.  His understanding of the nuances of the game from a players perspective are valuable.  It’s important to remember that this is a guy that shined in the toughest media market on the planet.  He knows a thing or two about pressure and what a tough press corps is all about.   He deflects criticism from the media aimed at his players towards himself, something that isn't always easy to do.

Now that the ball club is excelling, he’s letting his players take the credit.  Here he is, using the entire roster and getting everyone to contribute.  Look at how he handled under-performers like Brandon League, Carlos Marmol, Nick Punto and Jerry Hairston.  He found proper places to insert them into games and now we see that they too have contributed valuably.

He has allowed young and inexperienced players the opportunity to grow and learn on the job.  Chris Withrow arrived on the major league level and Mattingly effectively used him, placing him initially in games that weren’t crucial and pressure packed and as he excelled, ramping up his game time action to games that were more tense.  It would be safe to say that Withrow’s confidence level is off the charts now and he can be used in critical situations.  Mattingly did the same with Paco Rodriguez earlier in his career.

Early in the season, as a manager that was hamstrung with team injuries like no other team I'd ever witnessed, he held things together until enough pieces returned to place, and then simply let his guys excel.   He understood the 162 game process and exercised patience.  If you look at the participants in the 2013 season, 43 players have stepped between the lines at some point this season with most having contributed valuably at least once this year.

That might be Mattingly's strongest trait: getting his entire roster to contribute.  From Scott Van Slyke to Clayton Kershaw, Jose Dominguez to Justin Sellers.  The range of players from various levels of talent and effort is quite dynamic, and Mattingly has effectively plugged them into the lineup to the benefit of a .583 winnign percentage.  Now looking at a 70-50 record and 7.5 game lead in the N.L. West, it's hard to argue that the Dodger manager hasn't made a difference in turning this season around with his clubhouse management and team chemistry development.  Nearly everyone is looking at this Dodger team in a positive light and that has everything to do with Don Mattingly.  The thing is, he'll never acknowledge that because it isn't in his nature.  Another sign of leadership greatness.  The Dodgers really have a gem as their field general.