Matt Garza, newly acquired Texas Ranger, has officially become the latest baseball player to prove that he should NOT use twitter.  Man, I am so glad the Dodgers didn't acquire this guy via trade.

Garza was on the mound while Texas trailed 3-2  in the 7th inning at Oakland in Saturday's action.   A’s shortstop Eric Sogard laid down a perfect safety squeeze bunt that brought home another run in Oakland 4-2 win over the Rangers.  For some unknown reason that I’ll never understand, Matt Garza took offense to it.  Why?  I guess because he thinks getting beat fair and square isn’t right.

Garza immediately starting jawing at Sogard.  Probably challenging his manhood or something.  What was said wasn't quite decipherable, but I'm pretty sure there were a few f-bombs attached to it.  We aren’t talking about a squeeze play in a 8-0 game.  This was anybody’s ball game and it was a smart play.  It worked and Oakland brought across an important insurance run late in the game.

When asked afterward what he hollared at Sogard, Garza tried to use a futile attempt at humor.  “I asked him if there were any good places to eat in Oakland,” he quipped.  Sogard was claimed he didn't hear what the Texas pitcher was actually saying to him, but after the game he commented  “we scored a run, so he’s not going to be happy.”  Quite the understatement we were soon to find out.

What followed was a tweet by Kaycee Sogard, Eric’s wife, defending her husband for his fine bunt and the victory.   She must have said something about Garza's poor sportsmanship, I'm not sure what she said, as it was soon deleted, but whatever it was, Garza took offense.  The idiocy followed: 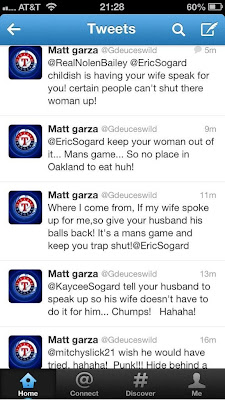 Garza’s tweet: “Where I come from, if my wife spoke up for me, so give your husband’s b___s back!  It’s a mans (sic) game and keep your trap shut! @Eric Sogard

Garza: “Childish behavior is having your wife speak for you!  Cerain people can’t shut there (sic) woman up.”

Garza: “@Eric Sogard keep your woman out of it...Mans (sic) game...So no place in Oakland to eat huh!”

Garza: “@KayceeSogard tell your husband to speak up so his wife doesn’t have to do it for him...Chumps! Hahaha!”

A couple of things.  1) Garza doesn't know the difference between "there" and "their."  2) He doesn't know how to properly use apostrophes. 3) He's a freaking idiot for taking this little battle of words public via twitter.

Garza's tweets are no longer available for public viewing.  They are "protected" to allow only certain people to read his mindless banter.   I imagine Matty has received a bit of scolding Texas style, probably from Nollie himself.  Some guys simply shouldn't be allowed access to social media, period.