It’s August 27th and Matt Kemp has been out of the Dodger lineup now for a month and six days.  Reports are that Kemp ran the bases today under the watchful eyes of Davey Lopes, Don Mattingly and Stan Conte.  He was tested with turns, stops and starts and base path cutting.  Kemp seems to have emerged from the drills in good health.  It is reported that he’ll repeat the process tomorrow if he has rebounded and is in good shape tomorrow.  Up next will be a minor league assignment and attempts to get back up to game speed.

It’s probably unlikely that Kemp will be activated before the end of the home stand on Sunday when they finish a three game set against the Padres.  The road trip coming up has the Dodgers traveling to Colorado for three and then on to Cincinnati for another three games.  Barring a setback, I'd say Kemp will be seeing action in Denver and Cincy.

Chicago Cubs TV commentator, Jim Deshaies, had this to say about Clayton Kershaw during the top of the fifth inning:

“I don’t think he has a good pick off move to first, but with that slide step, Ellis has a good shot of cutting off would be base stealers.”

Incredible.  How do these guys keep their jobs?  It isn’t like Kershaw is an unknown commodity in the majors.    For the record, Kershaw is third in the league in the amount of pick offs this year with 5.  Last year he led the league with 11.  In 2010 and 2011 he had the second most amount of pickoffs.  He had the third most pick offs in 2009.

Translation:  Kershaw has probably the best pick off move int he National League and he has for five years.  Deshaies didn’t know it.

The Dodger offense continues to struggle against mediocre pitching.  Travis Wood is a fine talent, but he isn’t considered a number one starter of high quality, such as Kershaw, who wasn’t on his game tonight.  The Cubs hitting approach was excellent as they got Kershaw’s pitch count over 100 by the 6th inning, forcing the Dodger starter to depart the game after 5 2/3 innings.  It was his shortest outing since April 23rd, a no decision at the Mets.

The Dodger hitting has been on hiatus since they raked in Miami last Thursday.  The hot offense cooling off was to be expected at some point, but it’s a concern how hitting approaches seemed to lack the patience of previous series.  Hitters such as Uribe, Mark Ellis and A.J. Ellis are seeing their averages drop quite rapidly.  The two out hits are not happening as they were during the midst of the Dodgers hot streak, but  runners aren’t being left in scoring position at a rate similar to the first half of the season, so there is that.

Juan Uribe’s two strike two out RBI single in the 6th inning was a welcome sight and broke Juan’s 0-13 skid.  Ethier’s eight inning single to drive in the second run was clutch.  Schumakers pinch hit double play groundout was crushing as the Dodgers appeared to have momentum going to get them in control of the game.

What’s with Dioner Navarro and his dominance of the Dodgers?  The guy is certainly motivated to beat them, the team that unceremoniously dumped him in the latter part of the 2011 season.  Navarro had a reputation of not working hard and Mattingly let the world know that when he was DFA’d.  Sometimes it is simply best to remain silent about things.  A guy like Navarro will have an axe to grind against the Dodgers for the rest of his career. 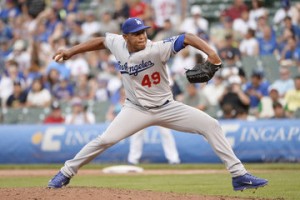 During that span he has lowered his ERA from 6.53 to 4.99.  That’s not easy for a reliever to do.  Once your ERA gets high, it takes a lot of stellar outings to make it respectable.  Marmol is starting to do that.