Yesterday was my last day in Miami and witnessing the Kershaw masterpiece and a Dodger offensive explosion was a good way to get out of town.  The Dodger debut of Brian Wilson was icing on the cake to close off the four game set.  Unable to complete this piece on Wilson before departing, I figured I could finish it on the plane back, only to find out that my laptop was completely out of battery power,  Such is life of a frustrated blogger that attempts to get a post up everyday.  Sometimes, it’s just not in the cards.
**********************************************************
The guy was seen as aloof and obnoxious.  He played for the heated rival and we couldn’t stand his antics.  If you dug down deep and admitted the honest truth, he was pretty darned good, and that’s probably why we couldn’t stand the guy.

He’d finish a game and do a gesture that we thought was arrogant and showboating in nature.  So did some Dodgers apparently as third baseman Casey Blake mocked it after homering off of him in a tight game.  He was livid about that and later it was determined that the gesture, (crossing his arms and pointing to the sky), was a tribute to his dead father, his faith in God and fighting for his teammates, Blake apologized.

Then there was the beard.  First it was short and trim and it gave him an intimidation factor that just added to his aura as one of the most successful closers in the game.  Then it got long and started looking different.  He dyed the thing jet black, then he added a mohawk to it, and people started questioning his psyche.  Probably a few hitters started wondering too.  It worked.  He was dominating with a league leading 48 saves and 1.81 ERA in 2010.

Rip Van WInkle was on the mound with a 98 MPH fastball.  Or was it the bass player from ZZ Top?  None of us were quite sure, but it was a strange sight and since he was a Giant, we could laugh at the look.  At least until he stepped on the mound.  “Fear the beard” became an advertising slogan of the Giants and in 2010, the ‘beard’ made it to the final game of the World series, recording the final out of his teams first World Series championship in 56 years.

When he blew out his elbow in the first month of the 2012 season, it appeared his career might be over.  This was the second Tommy John surgery of his career.  He rehabbed hard and remained the ultimate teammate, sitting in the dugout for the entire year and remaining with his club all the way to their second championship in two years.

With a contract that expired at the send of the season, his arm in tatters and a full rehabilitation process in the works, the Giants cut bait and let him loose.  There were some bitter feelings on his end.  The timing of the injury couldn’t be worse for him.  It was the only organization he had known, and they took a chance on him and drafted him in the 24th round of the 2003 amateur draft, when he was coming off his first ligament replacement surgery.  They gave him a shot once, when he was a lowly minor leaguer, but now as a major league all star who was earning $8.5 million per year, the organization felt that investing in him after the second surgery would be too risky.

So he worked hard.  He even set up an audition in February for some major league teams in Los Angeles.  Apparently it didn’t go well.  He was still months away from being ready.  Nobody took a flyer on him.

The months passed and he kept working out.  Every once in a while a rumor would surface that he was ready for a comeback.  There were the Oakland A's, the St. Louis Cardinals, the Pittsburgh Pirates.  Rumors swirled that all were interested in him.  The one organization that we didn't seem to hear about was the L.A. Dodgers.  The interesting thing about the situation was that he wanted to pitch in Los Angeles.  His home is in L.A.  So is his entire training routine.

In late July there was an interview on San Francisco radio with Ryan Vogelsong who admitted that he and the Giants pitching coach Dave Righetti had met Brian Wilson at a local community college for a private workout.  The Giants were apparently interested and it looked like a deal would be reached.  There was one problem though, the Giants had fallen out of contention and suddenly, they weren't a consideration anymore.

So on the eve of the trade deadline date, Wilson signed with the Dodgers.  He wanted to pitch on a contender.  He wanted to pitch near his home.  Ned Colletti, who signed him originally while with the Giants, once again was willing to take a chance on Wilson following a Tommy John surgery.

Most of all, Wilson wants to revitalize his career.  These two months could be an audition for a big money contract next year.  His role will be as a set up man.  Essentially to get the ball to Kenley Jansen for the 9th inning.

Twenty three days later, he entered his first major league game and the results were good.  Four batters faced.  One hit allowed, two strikeouts, zero runs scored.  He hit 94 MPH on the stadium radar gun.  He punched out superstar hitter Giancarlo Stanton, his first hitter. It was a 6-0 blowout, so the pressure wasn't there, and Wilson admitted that he wasn't even nervous.  Nevertheless, he had to be pleased with the results saying,  "It was an arduous process.  But I'm glad I went through it so I can appreciate baseball once even more."  It's going to be an interesting two months. 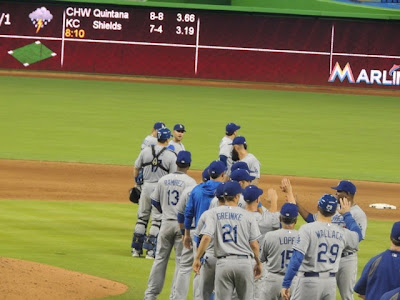