This Homestand is a Fiasco, Best to Address Other Things

This morning, on my last day in L.A. before heading back home, I made it to the Frank and Son facility today for the Andre Ethier signing.  It was the last thing to do in SoCal before jumping in the car and driving back home to Northern California.  I wasn’t left disappointed,  (unlike the Johnny Bench fiasco back in May).
To read about it, CLICK HERE
It looks like my luck is turning.
Additionally at this show was Tommy Lasorda, Ramon Martinez and the Soup nazi (Larry Thomas) from Seinfeld, but I really wanted to get my Ethier jersey signed and have my grandkids meet him briefly.  Andre couldn’t have been more friendly.  He is real great with kids.  He had them engaged in conversation and I thought that was a real nice personal touch to the event.  I wish we had snapped a photo when he was conversing with them, the picture we took didn’t do our 30 second exchange justice. 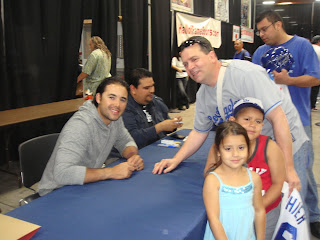 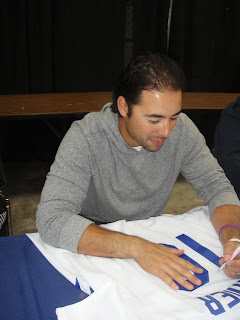 After the Ethier signing as I waited in line to get the signature authenticated, I overheard a kid say, “Hey, that was Roberto from Vin Scully is my Homeboy.”  So I looked and there he was.  We have corresponded since this blog started and I feel, struck up a friendship, but I had never met him.  We had a a quick conversation.  He was busy, getting taking photos of Ramon Martinez and Ethier signing.  My wife and grandkids got to meet him too.  He even asked my wife to snap a photo of us together and now I’m kicking myself that I didn’t hand her my camera too.  Oh, well.  Too bad we didn’t have more time but I really needed to get on the road and head on back.  It has been 7 straight days away from home with the grandkids.  We were tired and we had a long drive ahead of us.   I wanted to return home before nightfall arrived.
There were a few other persons we conversed with at the show.  One real interesting visit was with Jeff Connors, Chuck’s son.  He was peddling signed photos of his dad.  Not many are aware that Chuck Connors was a Brooklyn Dodger, Chicago Cub and Boston Celtic.  It was neat talking to him about his dad’s days with the Montreal Royals.  Jeff mentioned that he was going to talk to Tommy Lasorda and that it would be the first time he’ll see him since he was a little boy having dinner at the Lasorda household back in Montreal in the 50’s.  Jeff was quick to remind us that Chuck was the first NBA player to break a backboard in a game.  I thought I had remembered that fact, then looked it up and found out the the backboard was installed improperly and it was from a shot, not a dunk.  But hey, the Rifleman broke a backboard anyway.
The kids posed for a photo with Greg Townsend of the Raiders.  Their dad is a big Raider fan, so he’ll get a kick out of that.  Greg was also fantastic with the kids. 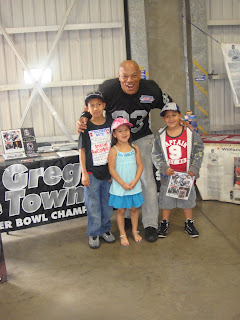 The Los Angeles Dodgers Adult Baseball Camp (LADABC) were there
Lastly, I spoke with a couple of the organizers of this years adult Dodgers fantasy camp.  And I’d like to put in a plug for it.  I would love to go this year.  Please check out their website on the link below.
Dodger Adult Baseball Camp Website
This is a fantastic opportunity.  I spoke to Mark Stone, the organizer and director of the LADABC.   You can find his journal of his first camp experience on the website.
I know how fantastic this experience is because back in 1998, while I was in the area on a work assignment, I stopped by Vero Beach one early morning and watched the campers in action, and it looked like an absolute blast.  That morning I watched campers playing for coaches Steve Yeager, Reggie Smith, Ken McMullen, Ralph Branca, Clem Labine and Carl Erskine.  The joking, laughter, and all around fun that everyone was having made it look like the camp was well worth everyone’s time and money.  I am seriously considering participating this year.  It’ll be at Vero Beach in November 6-12 and this years camp will be combined with the Yankees, which ought to make things real interesting since it is the 30th anniversary of the 1981 World Series between the clubs.
Dodger coaches committed to appear this year are: Rick Monday, Bill Russell, Jerry Reuss, Ron Cey, Steve Yeager, Tommy Davis, Dave Wallace, Jeff Torborg, Ramon Martinez and Lenny Harris.
Fees are due by August 15th, so act quickly if interested.
I made it back in time to watch the Dodger game against Houston.  Isn't this season painful?
Posted by Evan Bladh at 10:36:00 PM