7:27 PM
I got home from a late day at work to find the blue up 7-1 in the top of the 7th inning.  It’s nice to see another lead.  Do I dare start writing about a potential win, or is it premature?  The bullpen needs to record 9 outs and give up less than 6 runs.  In past years this would be a win 99.99% of the time.  This year, who knows?
8:00 PM
Fast forward 1 inning, and the bullpen and Dodger defense is imploding.  7-6 now in the bottom of the eighth.  I hate everything about Colorado.  And to think that I was considering taking a road trip out there for a weekend series.  Good thing those plans didn’t happen.  This team was doing worse with Broxton as the closer?
8:32 PM
Okay, the topsy turvy world of Dodger baseball has now resulted in a 4-run top of the Dodger ninth, so Javy Guerra comes in to attempt to record the final three outs as the Dodgers lead 11-6.
8:33 PM
Carlos Gonzales leads off with a ground rule double.
8:34 PM
Line drive snagged by Guerra and Cargo is doubled off.  Whew! One out away as Giambi comes to the plate.
8:44 PM
After Giambi, Tulowitski and Wiggington single, (with a run scoring), Spillborghs walks.  Guerra survives by the skin of his teeth thanks to a diving grab by Tony Gwynn Jr. on Blackman’s drive to left that would have scored three runs.  The tying run was at the plate.  Did I mention that I hate Colorado? 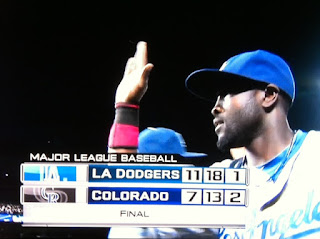