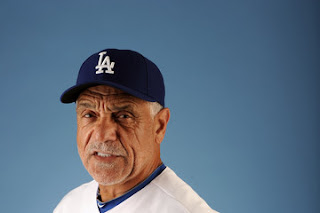 Ben Maller posted on his website and twitter that Davey Lopes was “slamming” Dodger fans.
I guess it’s perspective on how you read things.  After reading the entire CSNPhilly report on Lopes return to Philadelphia, I didn’t see it that way at all.  What do you think?
Lopes quote on returning to Philadelphia:  “I have nothing but great memories of this ballpark., and the fans I consider the best in baseball.”
Okay, let’s break this down.  First off, no problem with Davey having great memories of Citizens Bank Ballpark.  The Phils were very successful during his 4 years there.  They won a World Series, 2 pennants.  Of course he had great memories.  Stating that the fans are the best in baseball.  It's easy to make  a legitimate argument that is true since Philly fans are so passionate.  My opinion is that a lot of their passion has to do with not having much else to do in a region like Philadelphia, but that’s my opinion, no more.  Davey never was there when the Phils were bad, so he didn’t get much of a taste of the Philly fanbase ugly side.  But I can understand Davey’s feelings about their passion as fans.  Let’s see what he said next...
Lopes: “The intensity level coming into the ball park every day, I miss that tremendously.  As you’ll see when you go to L.A. with the empty seats.  They’re something you’re not used to seeing in L.A.  Neither am I.”
Maller underlined the portion of the quote: “as you’ll see when you go to L.A. with the empty seats,” and commented that Lopes was “ripping So Cal baseball supporters.”  That, I don’t see.  You’ll notice in his next statement, Lopes says that low turnout is a strange occurance in Los Angeles.  That is’s not something they or he is “used to seeing.”  Is that an attack on L.A. fans?  I think not. Lopes understands the problems the ownership has and the fans disillusionment.
Can we deny that there is a lack of emotion and intensity at Dodger Stadium this year?  Lopes is simply being honest. 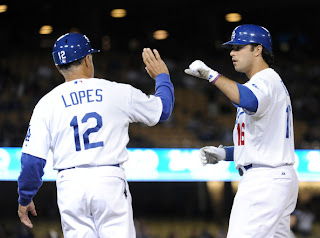 A look at the CSNPhilly.com article written by David Murphy gives more details, stating that Lopes is “disappointed with the situation in L.A.”  The ownership mess, an MLB appointee in charge.  Certainly we are all disappointed with the way things have gone, not just Lopes.  To single out Lopes is surely unfair to him.
Lopes said to Murphy: “It’s different. (referring to his return to the team and the atmosphere at Dodger Stadium), It’s been good, yeah.  But it’s different.  It’s not what I remember.  Put it that way.  It is what it is, for now.  We’ll see what happens in the near future.”
So there you have it.  A legendary Dodger, returns to coach, and the ownership situation blows up while he’s here.  He doesn’t have a right to an opinion?  I agree 100% with what Lopes said, and he refrained from saying more, because he knows that could really be viewed negatively.


The way I see it, Lopes took the high road and didn’t say anything controversial.  That’s to be commended, not criticized.