A Conversation with Myself, (I’ve Been Doing That a Lot This Season)

“I love the Dodgers, that’s why I want them to lose.”
Wow, I never thought I’d say those words, and from a die-hard fan that has followed the team for over 40 years.
“I’m looking at the big picture, this season is toast, what I want to see is the good prospects and proven major league studs, (such as Kemp and Kershaw), remain in the organization.  They are the future.  It would be tragic to see Colletti peddle off Jerry Sands or Rubby De La Rosa for some two month rental in an effort to make a run at the Division title this year.”


With the ownership situation in such flux, (Frank McCourt filing for bankruptcy today), how safe is the job of Ned Colletti?  You know he’s itching to be a buyer at the deadline in an effort to save his job.
So what would happen if the Dodgers were to go on a winning streak?  I mean a real winning streak.  Not one of those three gamers.  I’m talking about a 10 or 11 game streak, or winning 15 out of 17, something like that.  A winning string that puts them two or three back of first place.
“It could be catastrophic for the Dodgers,” I say.  “ It could set the franchise back for years.  Another trade in which we move a prospect such as a Carlos Santana for a proven veteran will put them in the second division for years.  If this were soccer, we’d end up being relegated to Triple A.”
So that’s why this loyal fan, yes, that’s me.  A fan that lives and breathes Dodgers, is seriously not really pulling for the team right now.
“That is not exactly accurate,” I admit in retrospect.  “I turn on the game and I’m rooting for them.  My heart is much stronger than my brain when it comes to this ball club.  If they win, I’m happy, but then common sense kicks in and my mind says ‘I hope they don’t put a string of these wins together, otherwise we’ll be looking at a bunch of stupid moves at the trade deadline.’  That isn’t in the best interest of the club.  They need a new direction.  It was a good run from 2004-2009, but the divorce and financial problems are too much now.  We need new ownership.  And we need it without destroying the positives that are still present with the franchise.” 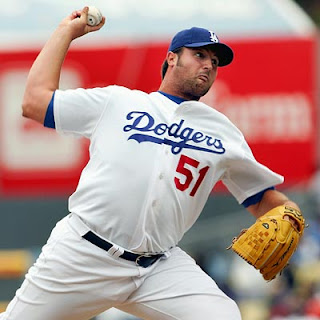 And those positives are Logan White in the front office.  Players such as the aforementioned Kershaw and Kemp.  I’d add Billingsley, Gordon, De La Rosa, Sands and even, (dare I say it), a healthy Broxton and Kuo to that mix.  I wouldn’t mind hanging on to some question marks such as Elbert, Lindblom and De Jesus too.
“We were so close,” I say forlornly.  “Just two years ago we were thinking World Series.  A call or a break or two our way and we could have faced the Yankees in the Fall Classic.  It’s heartbreaking.  It really is.  And now we are reduced to this...a punchless lineup that pinch hits Aaron Miles in the ninth inning when the game is on the line.”
***************************************
In the news of the day:
If you happened to be on another planet and missed it.  Frank McCourt filed for Bankruptcy today.
McCourt Files for Bankruptcy-Click HERE
and here with Bill Shaikin of the L.A. Times being interviewed:
ESPN Link to McCourt Bankruptcy story-Shaikin interview
Jonathan Broxton suffers a setback in his attempt to return from the disabled list:
for Broxton story - CLICK HERE
Ed Valentine, writing over at SB Nation, New York, lists Broxton as a potential player the Yankees could trade for, thinking that he could be snatched up in a deal cheaply:
to read about the Broxton trade rumor - CLICK HERE
Posted by Evan Bladh at 9:56:00 AM