So here I am, at the conclusion of another road trip (for me, not the Dodgers), packed and ready to leave Salt Lake City, UT for a flight home.  As luck would have it, no minor league games were played up here over the weekend or I would have gone.  The Angels Triple A affiliate, Salt Lake Bees were out of town.  The Pioneer League in which the Ogden Rapters play, doesn’t start up for a few weeks.  Checking out the news I see that I could have gone to an Arena football league game last night, which has really got me depressed. 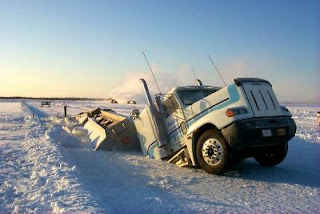 I sit in my hotel room, waiting for the appropriate time to leave and guess what’s on the TV?  Ice Road truckers!  Holy moly, avalanches on Atikin Pass!  The Polar Bear unlocks his trailer brakes by pounding on them with a mallet.  That is one cool reality show.  I hope I can hang here until the end of it.
I’ll arrive back home just in time to turn on my MLB package and see the Dodgers close out the Cincinnati series, hopefully with a win.  It was a nice comeback yesterday.  One that I couldn’t pay any attention to due to work assignments.  I looked at my iphone app and saw that they Dodgers were up 1-0 in the 5th, and the next time I checked it out, it was 7-7 in the 9th.  I was a bit shocked at the turn of events.  Nice to see the guys come back from a large deficit.
Checking out the minor league affiliates I see that Chris Withrow (1-5, 47 IP, 5.29 ERA) and Ethan Martin (4-4, 50 IP, 7.38 ERA) again had lackluster outings.  Is it possible that Logan White swung and missed at those two picks?  They aren’t progressing much at all and seem to be light years away from the Major Leagues.
The injury bug continues to bite hard as Furcal pulled an oblique, Garland went down with shoulder inflamation, Padilla had a setback with a neck ailment and Uribe got plunked on the hand in what was to be his final minor league rehab assignment.  No reports on Uribe’s condition, though Colletti reports that he was only “grazed” on the hand.  We’ll see if he reports to Philadelphia tomorrow.
The Dodgers recalled John Ely who I assume will take on a long man relief role and Ivan DeJesus Jr. who will waste away on the bench again as Mattingly probably plays Aaron Miles in favor of the young rookie.
Matt Kemp, with now over 1/3 of the season complete, is a legitimate candidate for Most Valuable Player.  Take a look at his stat line and were he stands amongst league leaders:
.318 Batting average (8th)
15 Homers (2nd)
46 RBI (1st)
36 Runs (11th)
69 Hits (7th)
14 Stolen Bases (5th)
.576 Slugging % (2nd)
If Matt goes on an awesome run, dare we think Triple Crown?  It'll be tough with so little protection in the lineup.  I'm surprised the league hasn't intentionally walked him more often.


Roberto over at Vin Scully is My Homeboy makes a case for Kemp to be voted as an All Start Starter.  I contest that he should be the leading vote getter for the Mid-Summer Classic.
CLICK HERE, Vin Scully is my Home Boy Link - Vote for Kemp
Good idea, go and vote him in now.