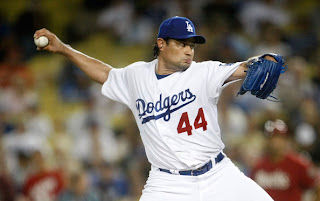 So, Vicente Padilla's 32 pitch 9th inning was quite an adventure last night, but it appeared to me that Ted Barrett simply wasn't giving him any corner pitches.  His fastball has some tailing off movement and on two occasions he could have rung up Diamondback hitters for strike three calls.  They were all borderline pitches.  It seemed to me that Barrett was a bit gun shy about ringing up the final out on a borderline call.
I don't see Padilla's performance as too concerning, except that he shouldn't go tonight after throwing so many pitches.  My props go to Don Mattingly who didn't leave him out there to die, like Torre so often did with his closers.  Jansen was ready to go and the fireballer was just what the doctor ordered.  It was nice to see KJ jump ahead 0-2 immediately on Melvin Mora.  Once he had the count, Jansen's 97 mph fastball up above the zone was simply something that Mora couldn't lay off of or catch up to.
Don't be fooled by Jansen high ERA.  His stuff is electric and he will be an asset to the bullpen for years to come.  Unfortunately for Kenley, his awful start to the season means he'll also have to pitch about 267 consecutive shutout innings to get his ERA under 4.00.  All in the same, that's fine by me.  Perhaps his unimpressive numbers will get many in the league to overlook his nasty stuff.
Tonight, Chad Billingsley gets Brian Runge behind the plate.  He's quite different than Barrett. Runge has had his share of run-ins over the years, but they always seem to be when he calls borderline pitches in favor of the pitchers.
Runge is the first and only umpire to eject mild mannered Ichiro Suzuki, who objected to his strike zone.  Additionally, a few years ago he had a well known rhubarb with Carlos Beltran over the same thing, being called out on a borderline strike.  We may best remember him as the umpire behind the plate that called strike three when Jonathan Sanchez of the Giants finished his no-hitter on a called third strike that was very questionable.  He got caught up in the moment and called an "Eric Greggesque" strike to end that game.
I look for Billingsley to have a good outing tonight and snatch up a few extra outs simply because he has that pitcher friendly umpire behind the plate.  Hopefully the offense can figure out Arizona rookie starter Josh Collmenter, who will be making his first major league start tonight.  How many times over the years have we seen this where an unknown rookie faces the Dodgers for the first time and dominates?
Collmenter in 14 innings of relief this year is 1-0 with a 1.29 ERA.  With a straight up "over the top" delivery, something rare for a right hander, Collmenter throws a fastball, change-up and curveball.  His delivery is confusing to hitters that need to adjust to it's awkwardness.  Collmenter is not projected any higher than a number 4 or 5 starter, so here's hoping that the guys read the scouting reports, make adjustments and don't turn the kid into a hero in his first big league start.
***********************************************
A few notes on last night's game:
Posted by Evan Bladh at 9:21:00 AM