I'm Cursed When it Comes to Collectibles

I'm 0 for 3 in the baseball memorabilia world this season.  I am the poster child for the person that has run into the worst luck in trying to get memorabilia autographed.  You don't want to get near me, I'm cursed.   Perhaps the Dodgers are doing the same things I am doing to extend their string of bad luck with all the losses and injuries they are having.   It must have been that black cat that crossed my path yesterday or the mirror I broke this morning.  Perhaps it's because I walked under a ladder in the garage or was it the salt I spilled at the table yesterday?  Today I struck out in my attempt to get Johnny Bench to sign an authentic jersey I purchased.
I have this plan to one day turn a spare bedroom of mine into a baseball memorabilia shrine.  (Okay, first I need to get an adult child of mine to move out of that spare bedroom and fend for himself in life...but that's another post for another day).  I have a few collectibles that I cherish but nothing overwhelmingly valuable in price.  Just things with sentimental value to me.  But I wanted to upgrade my collection this year, mainly with authentic replica jerseys that I’d like to get signed and then framed for my “baseball room.”  When I saw that there would be a few opportunities to obtain some fine autographs, I decided to go out and purchase the jerseys.
First up was Dave Stewart.  I knew he’d be signing (for free) at the Oakland A’s Single A affiliate Stockton Ports game on April 30th.  So I searched for jerseys on sale for him and decided to purchase the 1989 Oakland A's home jersey over the Dodger one I saw on eBay.  It was sold at a reasonable price, so I purchased it.  Timing was just not in the cards for me on this one.  My dad passed away a few days before the event, so I missed it.   So, I didn’t see missing this one as a big deal.  I figured there will be another opportunity one day and I’ll see Dave somewhere along the line in the future. 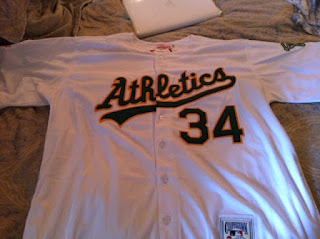 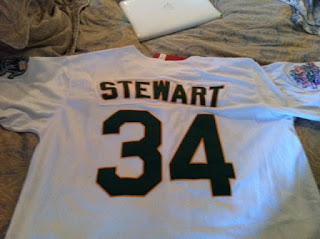 Next was the Tristar collectibles show at the San Francisco Cow Palace scheduled for May 20-22nd.  Quite a few players were scheduled to appear.  I was particularly interested in Johnny Bench and Gary Carter.  Two great Hall of Fame catchers, one from near my neighborhood in SoCal.  I purchased their jerseys via eBay auction also and was lined up to get their signatures.  I actually shelled out $125.00 to get Bench’s autograph with an inscription and official authentication.  For Carter, I received word that he cancelled his appearance and so I was stuck with that jersey purchase too.
(Sadly, I read of Gary’s health problems and wish him a speedy recovery). 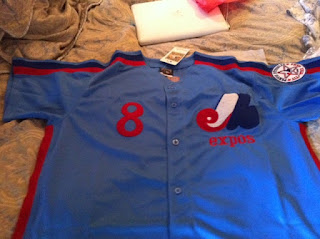 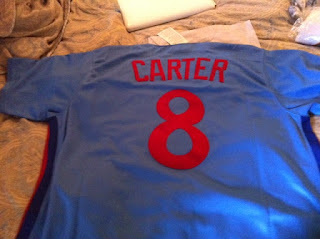 So today is the day of the Johnny Bench signing.  I arrived at the venue and had my tickets in hand,  Mind you, others were to also appear.  McCovey, Tony Perez, Joe Morgan, Whitey Herzog, Ricky Henderson, but I chose Bench because I always respected the man, he was a great catcher and classy player.   I wouldn’t have minded getting memorabilia signed by some of the others, but my budget will only go so far and I really couldn’t afford to pay for other signings.  Also, keep in mind that I already shelled out bucks on Stewart and Carter jerseys that will sit in a drawer waiting for another opportunity for a signing in the future.
So, as I’m waiting in line for the place to open, I check my iphone and look at the Tristar Web site and see the following message: 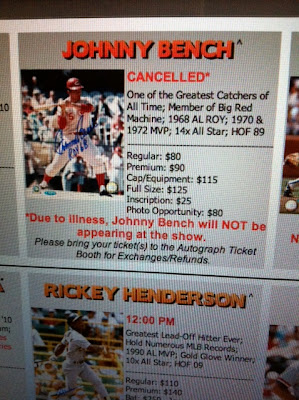 Great!  So now I have three jerseys that I have failed to get signed.  I might as well start wearing them now. 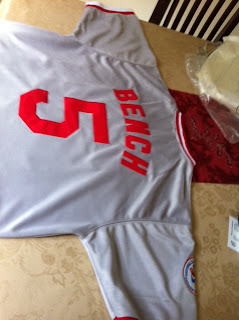 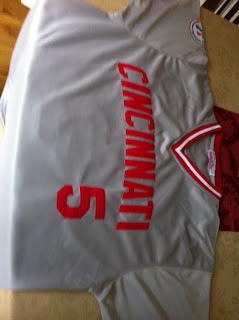 It isn't over yet.  I have vacation the week of the Frank and Son Show in the the City of Industry where Andre Ethier is going to appear and I already bought his jersey.  So we'll see if my dumb luck continues to run it's string.  Knowing how my misfortune is, MLB won't pick up the slack for McCourt missing his May payroll and Ethier will become a free agent and be playing for the Red Sox by June 18th. 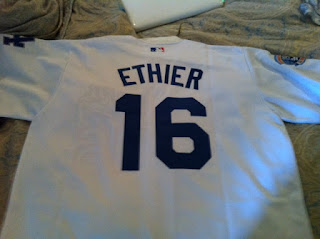