Odds and Ends on a Travel Day

My nephew was asking me how much his ball signed by Lance Cormier was worth.
“Let’s see, well you can buy an official major league ball for about $14.95 so after Lance Cormier signs it on the sweet spot, if it’s a sharp autograph, with a nice permanent ball point pen, preferably a 1.0 medium point, I’d say it’s current value is about $7.00.  Now if it’s erasable ink, then if you can remove it completely, $14.95 is about right.”
***********************************************
While going through my dad’s stuff, I ran across the evil binoculars that robbed me of my chance to catch a home run ball in 1974.
Link to story: RIGHT HERE
I asked my mother if I can have them and she happily gave them to me.  I’ll never take them to a game, but I get a chuckle out of having them in my possession.  Here they are, united with a Jose Cardenal signed baseball gifted to me by my brother as a practical joke. 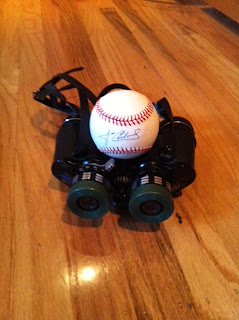 ***********************************************
Here is my logic to how Georgia Frontiere and Al Davis screwed over us Dodger fans.  Okay, bare with me here.  Frontiere and Davis bailed on the Southland after seeking Stadium deals elsewhere.  This interested Peter O’Malley in building an NFL Stadium in the Chavez Ravine parking lot, giving him hope that he could continue to afford the Dodgers in today’s climate of high salaries and free agent spending.  This potential deal was opposed by then L.A. Mayor Richard Riordan, who asked O’Malley to back down since the city was in favor of refurbishing the L.A. Coliseum.  Afterwhich, O”Malley determined that he could no longer afford the Dodgers in today’s sports ownership environment without that infusion of cash he would receive from the footbal team, forcing him to sell the Dodgers to Newscorp, (Fox).  Fox sells the team to McCourt and here we are today, with an owner, one month from being insolvent.
So, had Al or Georgia remained, would things be different today?  Probably not, but it was an interesting link and turn of events.  I wonder if Peter could have seen the potential TV deals available and held the team with those deals looming, eventually turning the club over to his son and nephew.  It’s a true shame that it didn’t happen.
************************************************
Andre Ethier is enjoying his off day in New York.  Here we read of his visit to the Fan Cave where he talks of his elbow injury, the Streak and superstitions.
Link highlighted below:
ARTICLE BY Mark Newman at Mlb.com
Posted by Evan Bladh at 8:13:00 PM