The Latest Loan for Frank McCourt
I hate to belabor the ownership issue but how can it be avoided?  The fact that Frank McCourt had to get a loan to make payroll and expenses for another month leads me to believe that he’s living on borrowed time.  Isn’t it a situation where he’s paying his bills with a maxed out credit card?  I just shake my head when I think of it.  I guess Bud Selig can’t stop an owner from obtaining personal loans.  McCourt’s debt to Fox just grows and grows making it highly doubtful that the Dodger TV network will ever occur.
From the looks of tonight’s crowd, it appears that fans are staying away.  That can’t be encouraging to McCourt as he attempts to stay afloat financially.
The Return of Big Mac
Looking in the St. Louis dugout and seeing Mark McGwire, it reminds me of how quickly he has been forgotten.  Once the toast of baseball, he now is a baseball pariah and viewed as what was wrong with the game for a good ten-fifteen year span.  Yet, there he is, still having Tony LaRussa in his corner.  It should be mentioned that the Cardinal hitting approach has been excellent in this series and if McGwire has anything to do with the St. Louis hitting prowess of late, perhaps he’s the one of the best hitting coaches in the game.
Too Many Pitches
I hope the rest of the league doesn’t take this type of hitting approach when they face Kershaw.  They are simply running up his pitch count with constant defensive swings on two strike counts.   He hasn’t been able to put anyone away in the first three innings of this game, with the surprising exception of Albert Pujols.  (As I write this, the Dodgers trail the Cardinals 5-1 on the fifth inning). 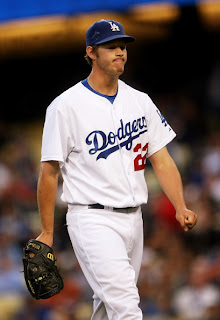 I can’t figure out how Clayton can be nails against Pujols, striking him out in his first two plate appearances, but struggled trying to put away opposing pitcher McClellan.  In AB # 1, it was about 12 pitches long as McClellan fouled off pitch after pitch.  Then in his second at bat, Kershaw walked him on four pitches costing him a run in the 4th inning as the next batter Theriot belted a double just inches from the top of the wall.  More gray hairs for Mattingly.
Umpire Joe West isn't pinching him.  Kershaw is just off kilter tonight.  He finishes the night throwing 111 pitches over 5 innings, walking five and striking out five.  The Cardinals probably fouled off 25% of his offerings tonight.
Stats Driving Mattingly's Decision to Not Pull Kershaw?
Okay, it was obvious that Clayton didn't have his stuff tonight.  So after throwing 4 2/3 innings and 111 pitches, a laboring Kershaw was trying to get through the fifth inning.  Mattingly allowed him to continue and "boom," Allen Craig hits a three run homer to really pull the Cardinals ahead.  My question is "why?"

If it was to get Clayton a possible win by going the required 5 innings - it's a dumb move.  If it was to get him to finish the inning so he could be pinch hit for in the bottom of the inning where he was scheduled to lead off - another dumb move.  There is such thing as a double switch.   Mattingly could have lifted Kershaw in the fourth and put DeJesus in at second base for Miles in the pitchers spot and then moved the reliever (MacDougal) in the 8th spot.  Anybody that played Strat-o-matic knows this.

It was also an ideal time to get DeJesus some plate appearances, something that Mattingly was just saying yesterday about DeJesus.  His need to get some work in.  I simply don't understand his failure to make these moves tonight.
These were the kind of decisions that Joe Torre made last year that would drive me crazy.  Double switch Donnie!  It's a simple double switch!
Posted by Evan Bladh at 9:01:00 PM