Robert Redford to Play Branch Rickey in Upcoming Film. His Connections to Drysdale 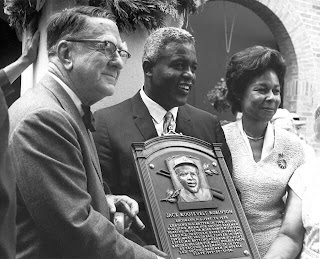 By the time I get this out, it'll probably be old news, but the Los Angeles Times reports today that Robert Redford has agreed to take on the role of Branch Rickey in an upcoming, untitled movie about Jackie Robinson and the integration of baseball.  At the moment, the actor to portray Jackie Robinson has not been chosen.

http://latimesblogs.latimes.com/movies/2011/04/robert-redford-branch-rickey-jackie-robinson-baseball-movie-biopic.html
http://www.movieline.com/2011/04/robert-redford-to-star-in-biopic-about-branch-rickey-and-jackie-robinson.php
Redford is said to be a former Van Nuys High School baseball teammate of Don Drysdale.  At least that is what is often mentioned in references to the two.  A Wikipedia entry under Drysdale's name states that Redford played second base and Drysdale pitched.  (That entry is certainly inaccurate since Redford throws left handed, it is highly doubtful that he played second base).  Wouldn't a photograph of those two on the diamond at the same time be priceless?  As far as I know, none are in existence.
What is the truth though?  In a Steve Henson 1993 article addressing Don Drysdale's death, it is reported that Redford never made the varsity team.  When asked about it, Drysdale led on that Redford was a standout player stating, "Oh, you mean Bobby.  He was a pretty good first baseman."  Interestingly though, one of Don's High School teammates quoted in the article states that "Redford never picked up a glove."
http://articles.latimes.com/1993-07-12/sports/sp-12538_1_van-nuys-high
Regardless of whether they were teammates or not, I look forward to this Redford motion picture and how they cover the historical events of the era.
Posted by Evan Bladh at 8:42:00 AM