Many writers of various publications (blogs and periodicals) have been speculating who the MLB Commissioner will select as a conservator over the Dodgers to oversee their operations.  There seems to be quite a bit of support for Peter O'Malley to fill that position.  A return of the O'Malley clan to head the Dodgers makes sense and would be received positively by the Los Angeles Dodgers community.
I received an email response from Tom Seidler.  It was classy, diplomatic and to the point.  I can't help but wonder though if asked by the MLB Commissioner to take charge of the club, would he agree to step in and do it?   It looks like he has his hands full at the moment with his own minor league club.  Additionally, I seem to remember that there were some disagreements between Bud Selig and Peter O'Malley years ago when Peter owned the team.  Perhaps Selig doesn't want to involve any O'Malley family members with the Dodgers again.
Below is the email I opened this morning from Mr. Seidler.
Hi Evan -

Appreciate the kind words.
We're building up a nice little Minor League Ballpark and operation here.
Come up and see it sometime if you get the chance.

Hopefully the Dodgers find a path to stability sooner rather than later. 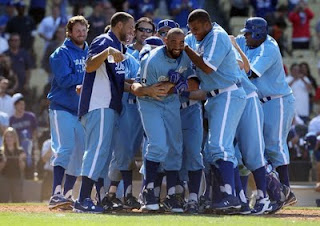 I originally didn't like the throwback powder blue uniforms, (preferred the 1911 team design that was proposed),  but the guys could wear angel periwinkle everyday if they continue winning in the dramatic fashion that they did yesterday.
I wonder how much longer they'll pitch to Kemp in clutch situations.  It was surprising to see him get a chance to win the game yesterday while first base was open again.  Thats two N.L. managers burned in 4 games.  How many more will risk the odds against Kemp this season?
Posted by Evan Bladh at 1:51:00 PM