Hey, Look What I Found. 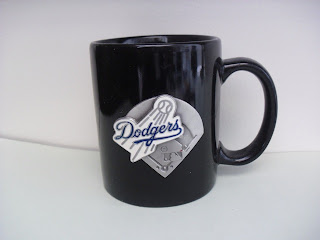 In a box labeled "Spring Training  2006," were a number of items that I had signed when I was in Vero Beach.  There is a signed photo of Grady Liddle, even a Jayson Werth signed photo.  Of course, Tommy signed a card, there's a Dioner Navarro signed picture along with a Rick Monday autographed photo.  There's also this sweet Dodger Mug that I never used.  And then I found these two gems. 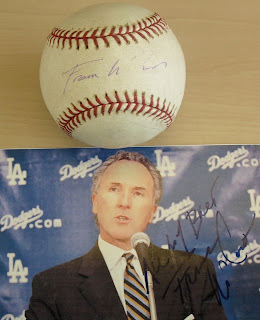 The ball is a spring training game used ball.  A foul ball that eventually ended up at my feet.  It has a weak signature, but an autograph from Frank McCourt nonetheless. The photo I had Mr. McCourt sign a few days later.  I wonder how these two items will be viewed years from now.  Could they be perceived the same as a Walter O'Malley signed ball and photo are in Brooklyn today?  Any predictions?
Posted by Evan Bladh at 10:18:00 AM